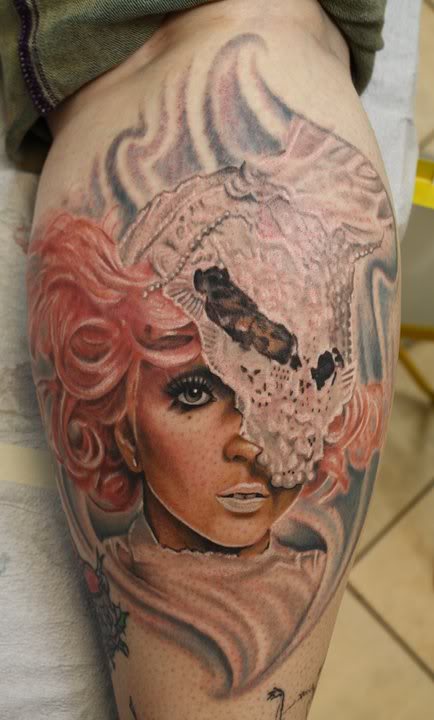 It’s been a good four months since Lady Gaga has debuted a new tattoo, but Gaga’s die-hard fans are making up for her radio silence by getting their own tattoos inspired by the controversial singer. And when it comes to tribute tattoos, Lady Gaga fans live by the mantra “go hard or go home.” The result? A wide variety of Lady Gaga tattoos – both good and bad. There is just something about Lady Gaga that makes people want to head to a tattoo shop and get inked. We’ve devoted some time in the past to seeking out some of the worst tattoos of Gaga (and there are plenty), but we’ve decided to switch gears a bit this time. So, here are some of the best Lady Gaga portrait tattoos we’ve seen in awhile!

This awesome tribute tattoo features a portrait of Lady Gaga à la the 2009 VMAs. Remember when Mother Monster hit the stage in a blonde and pink wig, a leather mask with feather horns and an all-white outfit, and then began spurting blood from her ribcage while singing about media vultures in her hit “Paparazzi?” Well, this incredibly detailed portrait tattoo perfectly captures that look, sans blood, thankfully. And even though the woman behind the mask doesn’t look exactly like Lady Gaga, the tattoo is otherwise so well done that we’re able to look past that.

This male Lady Gaga fan, who is apparently named Sean, opted for a huge ribcage tattoo of Gaga and Beyoncé dressed up in their full “Telephone” music video regalia. The portrait tattoo takes up the guy’s entire right side and is really bright and colorful, which makes it all the more interesting.

Even Lady Gaga took a liking to this fan tattoo, tweeting “Ok, this is the most amazing tattoo of all time,” in response to the photo, which was shared by none other than Perez Hilton. If you take a close look at the tribute tat, you’ll see that it’s not the most accurately detailed piece out there, but it took a lot of guts, and we like that!

B&W Portrait of Lady Gaga in the Buff

Okay, this is seriously one of the best Lady Gaga tattoos we’ve ever seen. In 2009, Lady Gaga sported a helmet-like blonde wig with blunt bangs that made her head look like a triangle, pairing the wig with a black hat that looked like it belonged to a police officer. This person got that exact likeness of Lady Gaga inked on their body, and the tribute tat is extremely well done. In the tattoo, the singer isn’t wearing any clothes and she has the index finger of her left hand in her mouth. The hair, the hat, the face, the eyes – it’s all awesome!

Fast forward to 2011, and you’ll see Lady Gaga sprout some seriously disturbing horn-like bones in her cheeks, forehead and shoulders that she denied were prosthetics. Real or not, Gaga’s creepy horns found their way into this person’s portrait tattoo, which pretty closely mirrors the pop star’s Born This Way album cover.

Not only does this Lady Gaga tattoo capture the singer’s protruding bones, wild flowing hair and signature cat-eye makeup, but it also includes Gaga’s own tattoos, including the flower, “Tokyo Love” and heart with “Dad” banner on her shoulder. This tattoo of Lady Gaga gets an A+ from us!