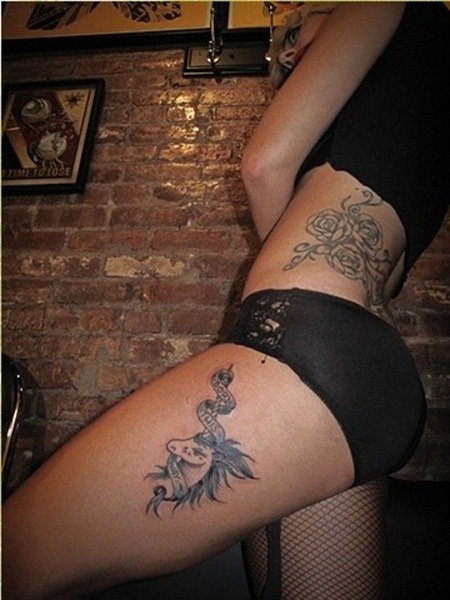 In honor of her third, highly-anticipated album titled Born This Way, Lady Gaga got a new tattoo inked on the outside of her left leg. And while you may be thinking “Gaga has a ton of tattoos, what’s another one?” you should know better than to assume that the singer’s leg tattoo has some sort of mundane meaning. What’s more, Gaga didn’t show off her album-inspired tat in just any old way; the unveiling of Gaga’s thigh tattoo was done – what else – Lady Gaga-style!

Lady Gaga’s leg tattoo features a white unicorn’s head with a flowing blue and purple mane and a banner wrapped around the unicorn’s horn that says “Born This Way” in capital letters. The pop star’s unicorn tattoo was inked by Bad News Becca, or Rebecca Roach, at the North Star Tattoo parlor in New York on September 7, 2010. However, it wasn’t until September 12th that Lady Gaga donned the infamous meat dress and attended the VMAs at the Nokia Theater in Los Angeles. Upon receiving her Video of the Year award for “Bad Romance,” Gaga let slip the name of her new album, Born This Way, as she belted out the first few lines from the title track. The next day, pics snapped of Lady Gaga showed the commemorative unicorn tat on her thigh as she walked through Los Angeles International Airport in black fishnets and not much else in the way of clothing.

Maybe you haven’t noticed, but there are some undeniable similarities between Lady Gaga’s 2011 single “Born This Way” and Madonna’s 1989 track “Express Yourself.” In reference to the queen of pop, Madonna says, “She’s a very talented artist. I certainly think she references me a lot in her work. And sometimes I think it’s amusing and flattering and well done.” Madonna also mentioned that when she heard “Born This Way” on the radio she thought to herself, “’That sounds very familiar’…it felt reductive.” And what does Gaga have to say about the supposed similarities between the two tracks? “I will look you in your eyes and tell you that I am not dumb enough or moronic enough to think that you are dumb enough or moronic enough not to see that I would have stolen a melody.” 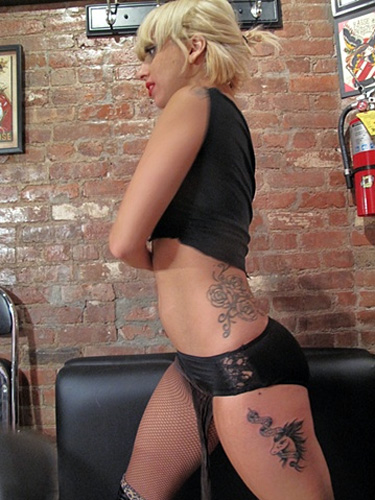 Well that clears it up…doesn’t it? Regardless of whether Lady Gaga was inspired by Madonna’s track or not, she has certainly proven her dedication to her own song and album with her thigh tattoo.

The Story Behind the Unicorn

So, we know that Lady Gaga’s tattoo on her thigh was inked to commemorate her third album of the same name. But why the unicorn? For a while, the public was puzzled; but now Gaga’s secret is out! According to the singer herself, the unicorn is her “favorite mythical creature;” she says she has been infatuated with unicorns since she was little and played with My Little Ponies. “I was obsessed with the idea of a creature that was born with something magical that sort of made them the misfit in the world of the stallion,” Gaga said. “The unicorn is born magical and it’s not the unicorn’s fault, and it doesn’t make it any more or less special or any less unique, but it can’t help that it was born with that magic.”

Perhaps it is embracing that magic that Lady Gaga is trying via music to encourage in her fans and everyone else in the world.

3 Responses to: Lady Gaga’s “Born This Way” Unicorn Tattoo on Her Leg