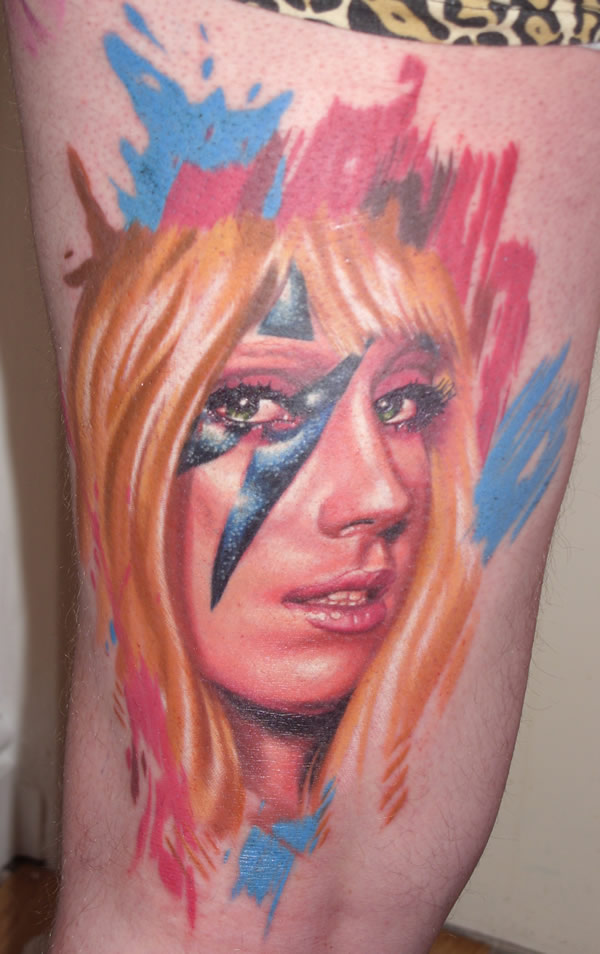 Lady Gaga’s outrageous style and controversial messages have spurred a following unlike any other, illustrated by this guy’s red and blue Lady Gaga tattoo on his leg. Although smaller and more subtle Gaga-inspired tats are cool, you’ve got to give this guy credit for getting a huge and very obvious tattoo featuring the singer’s face inked right on his quad. He ain’t scared!

As more and more people get tribute tattoos inspired by Lady Gaga inked on their bodies, fans of the pop queen are finding unique ways to set their Gaga-inspired tattoos apart from everyone else’s. Check out this guy’s tattoo on his leg for instance. Inspired by the costume and makeup Lady Gaga wore in her “Poker Face” video, this leg tat uses a colorful background and a life-like portrait of the superstar to really make a statement. The fact that the fan tattoo is very large and is inked smack dab on the outside of his right leg certainly doesn’t hurt either. It’s true that subtlety doesn’t always translate. Sometimes you just gotta go for it!

It’s really incredible how many different ways fans have found to ink Lady Gaga’s face on various parts of their bodies. Whether they are borrowing actual images from the singer’s albums or taking a more interpretive approach to their devotion, tattoos featuring the Lady Gaga’s face are more popular than ever. And again, not all tattoos honoring Lady Gaga are very realistic, and some are just plain cartoonish. Fan tattoos like this guy’s leg ink though, are actually pretty neat and are true to Lady Gaga’s appearance, which only proves how much the pop queen has influenced people all over the world.

In addition to tats of Lady Gaga’s face, fan tattoos honoring the pop queen include all kinds of things that have to do with Lady Gaga’s image or outrageous costumes. In fact, some people have actually had those awful lobster claw heels of hers inked on their bodies. But some of the best fan tattoos out there replicate the messages hinted at in the singer’s lyrics – simple and to the point. Lady Gaga’s Born This Way album, for example, prompted not only Lady Gaga herself to get a Born This Way tattoo inked on her leg, but also inspired fans to permanently imprint the phrase on their arms, legs, and even on the inside of their lips (yeah…we know, ouch). Lady Gaga fans are loud and proud though, and regardless of how interesting or downright strange Gaga tribute tats may seem to you, you can bet you haven’t seen the end of them yet!