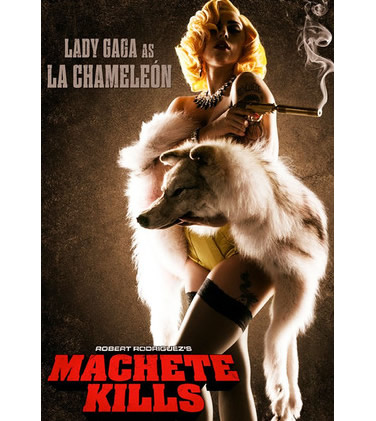 There’s no question that Lady Gaga is a fan of the Shamrock Social Club tattoo shop in Los Angeles, but getting inked may not be the only benefit to hanging out there. According to recent reports, Lady Gaga actually scored her very first film gig during a visit to the L.A. tattoo parlor, thanks to a chance encounter with Hollywood actor Danny Trejo back in 2012. Because of that fateful visit, our very own Lady Gaga will be making her feature-acting debut as a bad-ass character called La Chameleón in the upcoming Machete Kills, sequel to Robert Rodriguez’s 2010 B-film Machete, which also starred Danny Trejo.

According to a spokesperson for Open Road Films, Trejo and Gaga happened to be sitting next to one another at the Shamrock Social Club early last year when the subject of Trejo’s upcoming film, Machete Kills, came up. Lady Gaga expressed her interest in someday working with director Robert Rodriquez, Trejo put in a call to the director on Gaga’s behalf, and the rest, as they say, is history. Rodriguez himself broke news of the surprise casting last July, tweeting, “I just finished working with @LadyGaga on @MacheteKills, she kicked SO MUCH ASS! Holy Smokes. Blown away!” Lady Gaga followed up Rodriquez’s tweet with a note to her 27 million followers, writing, “Yes, its true, I will be making my debut as an actress in the amazing MACHETE KILLS BY @ RODRIGUEZ IM SO EXCITED!!!” We think she’s excited.

Lady Gaga Getting Inked and Getting Movie Roles

Lady Gaga is no stranger to the Shamrock Social Club tattoo parlor. It’s where she got her infamous “Little Monsters” arm tattoo inked in 2010, and she spurred new tattoo rumors earlier this year when she was spotted leaving that very same parlor after spending a whopping FIVE hours inside. Considering we haven’t seen a new addition to Lady Gaga’s already extensive tattoo collection, perhaps she was simply rubbing elbows with some Hollywood hot shots again. Okay, so Danny Trejo may not be a hot shot per say, but he is at least partially responsible for Gaga’s acting debut, and he loves getting inked about as much as Lady Gaga does. Oddly enough, Rihanna also ran into Danny Trejo during a tattoo session in early 2012, except hers was at the Shamrock Shack tattoo shop, also in L.A. That guy sure gets around!