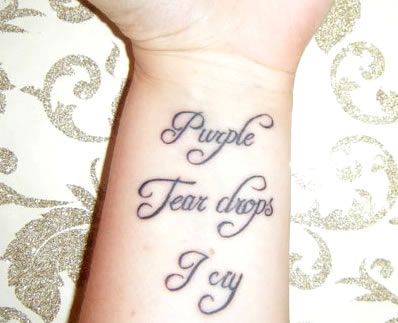 If you’re inspired by lyrics to a song, there’s no better way to incorporate that inspiration into your everyday life than to get a tattoo of the lyrics permanently inked on your body, right? We can’t think of a single other artist besides Lady Gaga who has had so many of her songs immortalized in tattoos that fans get of her lyrics. At least most tattoos inspired by Lady Gaga lyrics are better than the “Baby” lyrics a Justin Bieber fanatic recently got inked on her thigh, though. What do you think of these unique Gaga tribute tats?

Lady Gaga has proven herself to be somewhat of a lyrical genius, spurring a sort of revolution with the lyrics to her inspirational and empowering songs. She writes all of her own music, and some of her most powerful songs, including “Poker Face,” “Dance in the Dark,” and “Bad Romance” from her Fame Monster album deal with the darker side of fame that she has experienced in her own personal life, expressed using a monster metaphor. This metaphor has also crossed over to Lady Gaga’s own fans, whom she affectionately calls her “Little Monsters.” Clearly, the singer’s lyrics have reached the masses, as many Gaga fans have decided to get her words inked on their bodies as proof of their devotion to the pop star. Check out the cool tats inspired by her lyrics below.

This person got the lyrics, “I want your bad, your bad romance” inked on their left hip, extending only slightly onto their stomach and back. The Gaga-inspired tat is inked in a fun and simple font and the lyrics come from the pop queen’s hit song, “Bad Romance.” Lady Gaga is known for writing songs that are symbolic and filled with hidden meanings, so what’s the deal with “Bad Romance?” In combination with its video, the lyrics to “Bad Romance” illustrate the dark inner-workings of the entertainment industry, symbolically portraying Gaga as a sex slave.

We’re pretty sure this isn’t what this person was referring to when they got this lyrics tat, so maybe they just thought the words corresponded nicely with their attraction to bad boys?

Cool “Dance in the Dark” Tattoo

The person in this picture got “Baby loves to Dance in the Dark ’cause when he’s looking she falls apart” tattooed on the inside of their forearm. 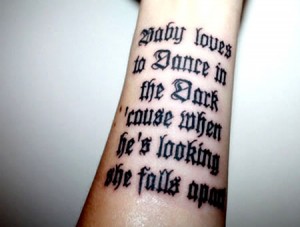 This fan tattoo is inked in a bold Gothic font, and comes from another one of Lady Gaga’sFame Monstersongs called “Dance in the Dark.” The font and wording of this Gaga-inspired ink make the meaning seem dark and almost sinister, but that is not the case. According to Gaga, “the song is about a girl who likes to have sex with the lights off, because she’s embarrassed about her body.” This lyrics tattoo speaks to the insecurity that most everyone feels at some point in their life, and, as Gaga says, “I get it. I feel you, I feel the same way, and it’s OK.”

This arm tattoo includes the lyrics “Russian roulette is not the same without a gun,” which comes from Lady Gaga’s song, “Poker Face.” This fan tat is inked in a small script font in two separate lines on this person’s left shoulder.

Gaga’s “Poker Face” is known as one of the best-selling singles of all time, but few people know the true meaning behind the lyrics. According to Gaga herself, “Poker Face” actually describes her personal experience with bisexuality, and was meant as a tribute to her rock and roll boyfriends. As the singer says, “I gamble but I’ve also dated a lot of guys who are really into sex and booze and gambling, so I wanted to write a record my boyfriends would like too.” There you have it folks; Lady Gaga’s song about poker, gambling and Russian roulette is actually about “being with a man but fantasizing about being with a woman.” This is a great example of making sure you fully research the meaning of a tattoo before getting it inked on your body!