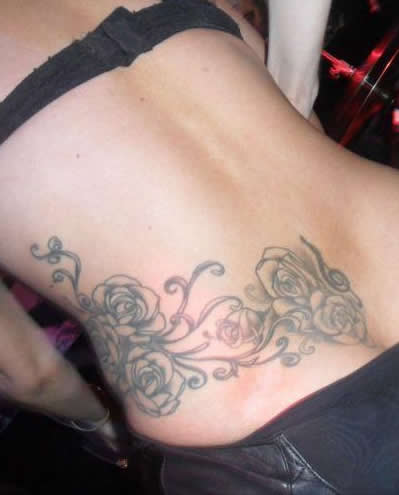 Lady Gaga’s third tattoo consists of a swirling mass of white roses inked on her left side and lower back. She got the tat in Hollywood in 2008 because she loves flowers and is especially passionate about white roses. But would you believe us if we told you that Lady Gaga’s hip tattoo was all a big cover-up? Read on to find out what exactly the singer wanted to hide with her rose tat and what celebrity tattoo artist inked the hip tattoo for her.

Lady Gaga’s hip tat is a particularly large piece featuring intertwining vines and roses, and is inked in simple black and white, like most of her other tattoos. The rose tattoo begins at her left hip and runs up and onto to her back, ending just above her butt. The singer’s hip tattoo was inked by celebrity tattoo artist Kat Von D at L.A.’s High Voltage tattoo parlor in March 2008, before she “made it big” in the music industry. Lady Gaga apparently loves Kat’s work, and judging by the pretty rose tat, it’s not hard to see why!

The Meaning of Gaga’s Rose Tattoo

Believe it or not, the main reason Lady Gaga got the rose tat inked on her hip and back was so she could blend it into (and basically cover up) the treble clef tattoo she got with a fake ID when she was 17. We don’t blame her for deciding that the music-inspired tat wasn’t something she wanted to keep and doing something about it. Can you think of anything you did when you were 17 that you wish you could cover up? We thought so. So, Gaga showed up at High Voltage in a blonde wig and skin-tight electric blue pants and asked Kat Von D to give her some ink. Needless to say, Kat never forgot her.

The Story Behind the Singer’s Hip Tat 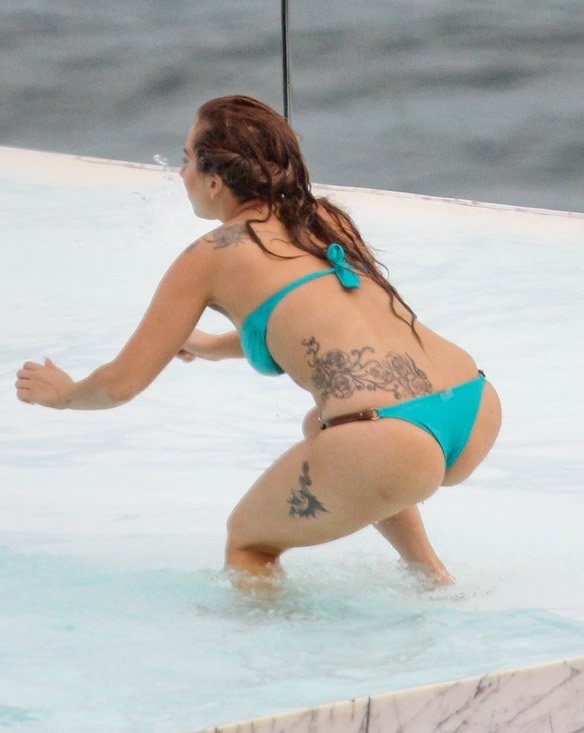 When asked about tattooing Lady Gaga, Kat Von D remembers quite a bit about her experience with the not-yet-famous Stefani Germanotta. “I was tattooing this rose on her hip. I’m like, ‘Why did you move out here?’ She said, ‘I moved out here to make it big,’” Kat Von D recalls. “I was like, ‘Yeah, you and everyone else’ or whatever, and she’s like, ‘No, no! I’m here to make it big!’ The next thing you know, a week later, her face is everywhere and I’m like, ‘Dude, she did it! That’s awesome!’” That “she did it” moment for Lady Gaga came with the release of her debut album, The Fame, which catapulted her into the spotlight around the globe.

Kat, who starred in the hit series LA Ink, went into more detail about Lady Gaga’s tattoo during her Lopez Tonight appearance: “She just wanted simple black and grey…She was wearing this crazy wig and blue shiny pants. I was like ‘I like you! You’re like a cartoon character!’”

Simple and grey? Lady Gaga? Who would have thought! Turns out, the singer loves white roses and daisies, and managed to incorporate these two types of flowers into a hip tat and a separate back tattoo. There have also been rumors circulating recently that Lady Gaga is planning on getting a large Virgin Mary tat on her back. If she decides to go with the Virgin Mary back tattoo, she will have to somehow tie it into her daisy and rose tattoos. Then again, she seems like someone who always finds a way!