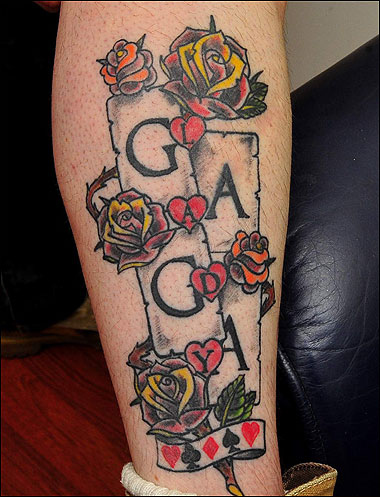 Yet another guy has decided to get a tattoo inspired by Lady Gaga inked on his body. And get this – he already has two and plans to get a third. But that’s not the best part about this guy’s obsession with the pop queen. Find out what this Lady Gaga fan did that really sets him apart from everyone else!

A 32-year-old man from Glascow, Scotland has gone the extra mile to prove he is a die-hard Lady Gaga fan. He currently has two Gaga-inspired tats inked on his body and he plans to get more sometime soon. Wait…did you think that was the weird part? We should also mention that, once all the legal paperwork goes through, Mr. Jamie Clayton from Queens Park, Glascow will forever be known as Mr. Jamie Gaga Monster Clayton (or at least until he decides to change it back). That’s right, in addition to devoting large sections of his body to tribute tattoos inspired by the pop queen, this middle-aged man is also in the process of taking Gaga’s name.

Jamie Clayton got a tattoo of Lady Gaga inked on the back of his neck that appears to be modeled after the singer’s makeup and hairstyle in her “Just Dance” video. Complete with a lightning bolt costume, “Gaga” glasses and a scepter, this miniature cartoon Gaga looks like a mini-me version of the pop superstar. She even has her signature platinum blonde hair and hair bow. The superfan tattoo is inked on the back of this guy’s neck, and extends from just below his hairline to the bottom of his neck. 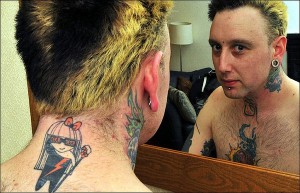 Moving along, this Lady Gaga fanatic also has a tribute tat inked on the outside of his right leg, extending from just below his knee all the way to his ankle. The tattoo is inspired by Lady Gaga’s “Poker Face,” a wildly popular single from her debut album, The Fame. This particular tattoo features four playing card-sized rectangles with “G-A-G-A” inked on them, and four small hearts running down the middle of the tat that read “L-A-D-Y.” At the bottom of the tattoo, there is a small banner with two hearts, a club, a diamond and a spade design. The whole tribute tattoo is surrounded by roses and thorns.

Lady Gaga fans love the fact that they can publicly display their devotion to the controversial singer and performer by getting tribute tattoos inked on their bodies. From what we can see, this guy already has several tattoos inked on his neck, chest, and arm (and that’s just his upper body!), including the two Lady Gaga-inspired tats, and he plans to get at least one other tribute to the pop star. But it doesn’t end there. “I’m also involved in about 100 Gaga Facebook pages. And I’ve started the process of changing my name,” said Clayton, or should we say, Gaga Monster Clayton. “People find it a bit odd. But that doesn’t bother me. I’ve always done what I like.” We say more power to ya!