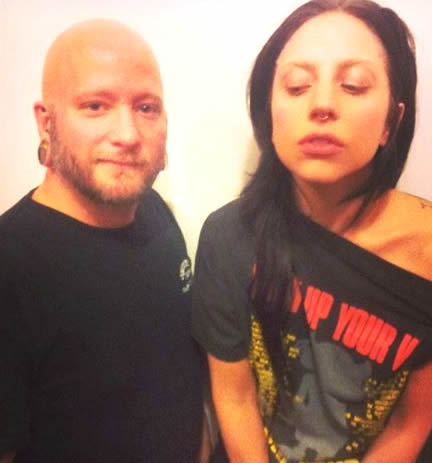 Of course Lady Gaga wanted getting her septum pierced on video to share with the world. The super cutting-edge pop star visited MasterMind Ink in North Chicago on Tuesday, but not to get a new tattoo. Instead, Gaga wanted to get her septum, the fleshy cartilage between her nostrils, pierced and a hoop placed in. Lady Gaga has not had any new tats inked since her “Rio” tattoo done back in Nov ’12, so fans easily thought she was visiting the Chi Town tattoo parlor to get new ink, as rumors have been flying around about possible new tats with her visits to other tattoo parlors around LA. The new piercing is surprising, but def not shocking, can Lady Gaga even shock anyone anymore? We’ll see…

Gaga was refferd to MasterMind and she even called ahead to let them know she was coming, unlike 1D’s Zayn Malik and Louis Thomlinson who popped-in to a Maryland tattoo parlor in late June.  “She came with a security team is, all I know and one of her photographers,” tattoo artist Scott Pizer, 27. “She was referred to us.”

Lady Gaga stayed for about an hour. “She was awesome, she was nice, she was friendly. I can’t say anything bad about her. She was very down to earth” said shop employees. Pizer’s fellow artist Joshua Clay told NBCChicago that Gaga was “cool as hell, made a point to hang out and meet all of us.

After having the skin between her nostrils pierced by store manager Steve Bennett, Gaga gave the shop a parting gift: a photo now posted on Facebook page.