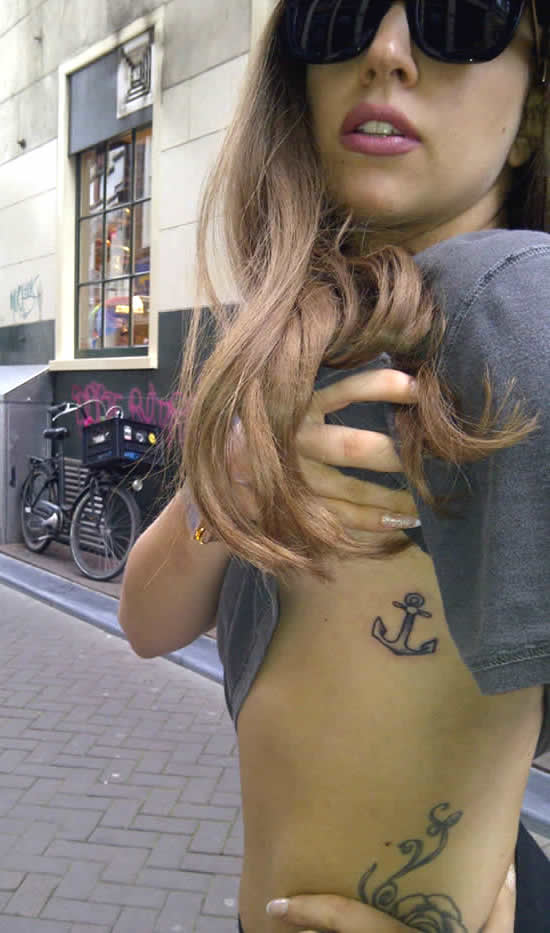 Lady Gaga got her 11th tattoo on September 1, 2012, while in Amsterdam during the European part of her Born This Way Ball tour. The small black and white anchor is inked on her left side (of course) at breast level, just under her armpit. The pop star tweeted pics of her new tat on September 2, writing: “New Tat. Stamp of His Mermaid”, later adding “Thanks Hank and @amstattoomuseum for my New Ink!! we miss you already, see you at the ball!” Mother Monster had the tat done at Amsterdam Tattoo Museum by local tattoo artist Hank. She even snapped some pics with her artist to show her thanks. Pretty sure Hank was stoked!

Lady Gaga joins a few other pop music celebs, including Miley Cyrus, that also sport an anchor tattoo.  The meaning behind the new tat is said to be symbolic of her relationship with Taylor Kinney. The hot couple met during the “You & I”  music video shoot, where Lady Gaga was transformed into a mermaid.

Throughout the unusual music video, which aired in 2011, Lady Gaga undergoes a number of procedures at the hands of her mad scientist lover, at one point becoming a mermaid called Yuyi. The scientist doesn’t seem to mind that his lover is now a mermaid though, as the two proceed to get it on in the video, their bodies gyrating in rhythm with one another.

In response to questions from one fan regarding the mechanics of a human and mermaid having sex with one another, Lady Gaga said, “Well, that’s actually part of what the metaphor is – you can’t.” She elaborated: “Sometimes in love, you can’t make it work. No matter what you do, there’s this giant boundary between you and someone else. So that’s what it’s about, perceiving in your imagination that there’s something magical inside of you that you can make it work.”

Could all this talk about love not working out mean trouble in paradise for Lady Gaga and her current boyfriend, Taylor Kinney? Don’t worry Gaga fans, the relationship between the singer and Kinney is far from troubled. In fact, since the couple started dating about a year ago, Lady Gaga has been making waves in the Twitter world with some scandalous pics of the singer and her sexy beau, including one in which the two are skinny-dipping in a pool while making out. Those steamy pics were posted online in the beginning of August 2012, but the new pictures of the singer’s anchor tat have definitely stolen the show since then.

What Does Gaga’s Anchor Tat Mean? 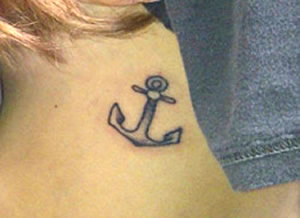 If you’re wondering about the real meaning behind Lady Gaga’s tattoo, it was actually a former flame that influenced the singer’s creative spirit and served as the inspiration for the “You and I” music video. She explains: “For me, it was all about capturing the true spirit of the song, which is when you’re in love, you’ll be willing to walk and do the craziest and most inconvenient things you can possibly imagine.” Lady Gaga goes on to say, “The video is quite complex in the way that the story is told, and it’s meant to be slightly linear and slightly twisted and confusing, which is the way that love is.” If you’re still not convinced that Lady Gaga and Taylor Kinney are still an item, rest assured, it was actually Kinney who starred alongside Gaga in the “You and I” video, and the couple even gets (fake) married during the shoot! Gaga’s anchor tattoo is a reminder of the work the two did together on the shoot and clearly represents the strong feelings the singer has toward her boyfriend.