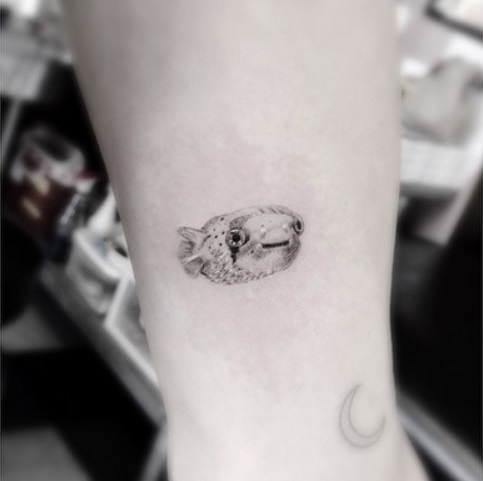 Saying goodbye is never easy, but it eases the pain a bit when you have a permanent reminder of the loved one you’ve lost…is apparently what Miley Cyrus believes, considering the fact that she just got a brand new tattoo of her late fish. Yes, fish. On February 5, Miley posted a photo on Instagram of what is apparently a deceased pet puffer fish of hers, along with the caption, “I hate goodbyes.” Then, just 30 minutes later, the infamous Dr. Woo of the Shamrock Social Club tattoo shop in West Hollywood posted a photo of a brand-new Miley Cyrus tattoo…featuring that very same fish.

Miley Cyrus’ tattoo is inked on the upper part of her left arm, in between her crescent moon tattoo and the “love never dies” tat she had inked on the inside of her bicep back in 2012. The ink features a black and white image of Miley Cyrus’ puffer fish, which apparently passed away recently. This is the second time Miley has gone under the needle in honor of a late pet, the first time being last July when she got a tattoo on her ribcage of her deceased Alaskan Kee Kai Floyd, along with a text bubble reading “With a little help from my fwends.”

There’s no doubt that Miley Cyrus is an animal lover, and the singer currently has several pets that keep her company on tour and in her home, including a hoard of dogs and an adorable pet pig named Bubba Sue.

When poor Floyd passed away following a gruesome coyote attack last April, Miley honored the late pooch during performances on her Bangerz world tour, and the pop star continues to mourn the loss of the pup to this day, close to a year later. Apparently, Miley’s deceased fish held an equally important place in her heart, and she is now the proud owner of a puffer fish arm tattoo!