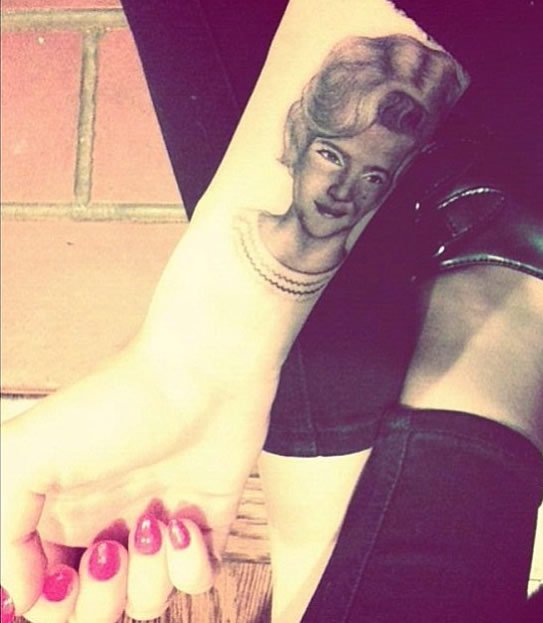 Miley Cyrus is quickly becoming more and more comfortable with large, detailed tattoos, and the singer has just debuted another awesome and very intricate new tattoo on her arm – this time paying tribute to her grandmother, Loretta Finley. Miley’s arm tattoo features a black and white image of her “mammie” as a young woman, and the incredibly detailed tat was done by – who else – Kat Von D. Although many of Miley Cyrus’ tattoos in the past have been inspired by loved ones – her family members in particular – this is the first time the singer has actually had someone’s portrait immortalized on her body. Lucky Mammie!

Miley took to Twitter to reveal her vintage-looking arm tattoo on November 5, 2013, accompanying the image with a shout-out to Loretta Finley: “Because I am her favorite & she is mine.” Ouch…no disrespect Noah, Trace, Brandi, Braison, or Christopher, but apparently Mammie plays favorites with her grandchildren. Miley chose to have the portrait tattoo inked below her anatomical heart tat on the inside of her right forearm, in almost the exact same place as Megan Fox’s tattoo of Marilyn Monroe’s portrait (which is in the process of being removed as we speak). Come to think of it, Miley Cyrus’ grandmother kinda looks like Marilyn Monroe!

Judging by the fact that Kat Von D has inked five tattoos in a row for Miley already, we wouldn’t be surprised if the inked-up singer sticks to the celebrity tattoo artist exclusively in the future.

They obviously have a good vibe going; Kat Von D was quick to thank Miley for choosing her to do the important arm tattoo, writing on Instagram, “Love, love, loved tattooing you last night @mileycyrus.” Miley voiced her own opinions about the tattoo session that resulted in her new portrait tattoo, tweeting, “Yesterday was a day of making music, tattooing and hangin w/ friends…Gonna repeat that today!” Oh boy, could there be yet another tattoo in Miley’s future?