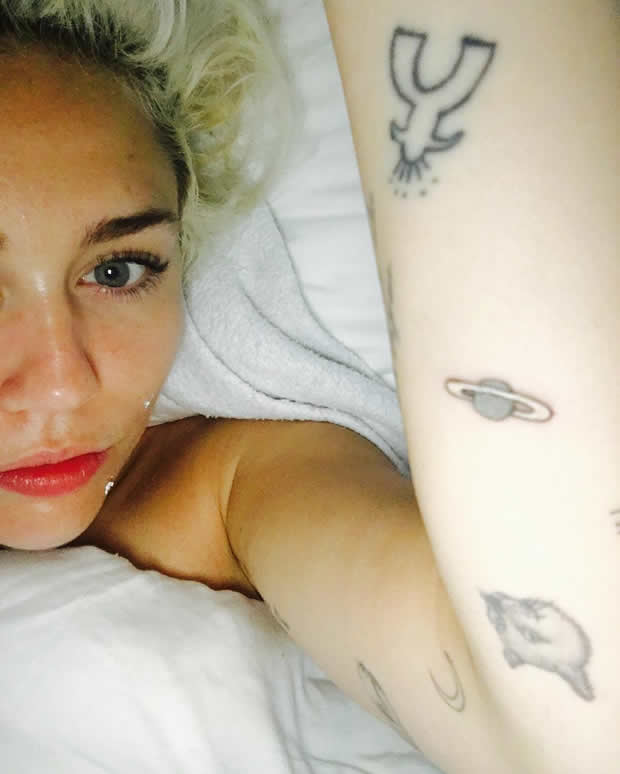 Miley Cyrus debuted a brand-new tattoo on Instagram yesterday, crediting “daaa mossst bad a$$ @laurenwinzer” for the ink, which features an image of a planet with a ring around it on the inside of the pop star’s left forearm, right near her cat head and robot tattoos. Miley Cyrus is obviously a big fan of emojis – she has several of them inked on her body, including a crescent moon tattoo on her arm, a sad kitty tat on the inside of her lip and heart, alien head, pizza slice and watermelon slice tattoos on her fingers, just to name a few. And now Miley has a miniature planet tattoo that stays true to the emoji-style theme she is currently obsessed with.

The confusion about Miley Cyrus’ tattoo has multiple layers. First, when Miley revealed her new planet tattoo on Instagram, she used the hashtag #lilbbjupiter, which had some questioning the singer’s knowledge of outer space, since the planet in her arm tattoo clearly has rings and therefore must represent Saturn, not Jupiter…right? As one Twitter user put it, “Uhh…that’s Saturn…the only planet with rings.” Well, apparently not.

Miley’s tattoo artist, Sydney, Australia-based Lauren Winzer, was quick to come to the 23-year-old’s defense in the great Jupiter/Saturn debate, posting a photo of the fresh ink on Instagram, with the caption: “Lil baby planet and healed kitty from 2 years ago for lil baby @mileycyrus always getting the cutest things…also side note Jupiter has rings too just little tatty interpretation!”

So, apparently, while we are more familiar with the look of Saturn’s rings, which are bright, visible and made primarily of ice, Jupiter also has rings, faint, dark ones comprised of dust and tiny shards of rock, as does Uranus and Neptune. According to the NASA website, “Jupiter’s rings were discovered in 1979 by the passing Voyager 1 spacecraft, but their origin was a mystery. Data from the Galileo spacecraft that orbited Jupiter from 1995 to 2003 later confirmed that these rings were created by meteoroid impacts on small nearby moons.”

So, there you have it, folks. Miley Cyrus’s new arm tattoo could, in fact, be an accurate depiction of the planet Jupiter, rings and all!

One Response to: Miley Cyrus’ New Planet Tattoo is Confusing as Hell