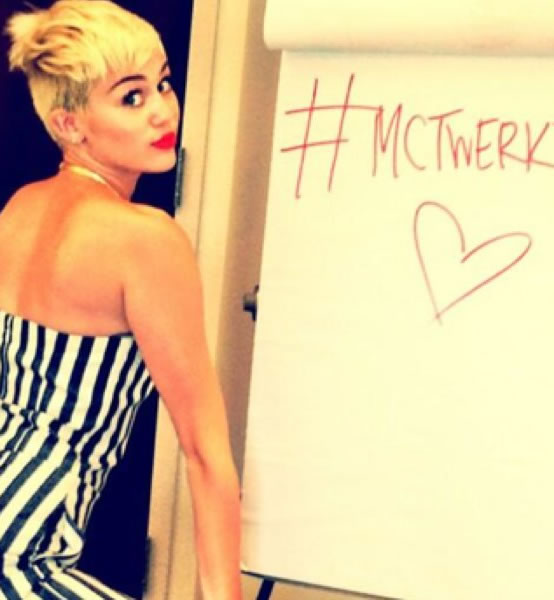 If the terms “twerkin” and “Wop” meant nothing to you before, we really wouldn’t be surprised, but now that Miley Cyrus has gotten her hands on J. Dash and Flo Rida’s little-known hip-hop track and turned it into an internet sensation, you probably won’t be able to go a day without hearing some reference to “Wop” or Miley’s killer moves in the video she recently posted online. The black and white video, in which Miley breaks it down in an odd full-piece unicorn suit, was such a hit, in fact, that the song “Wop” has since skyrocketed 500 spots in just five days, and Miley Cyrus and J. Dash are now joking about getting matching unicorn tattoos.

Miley Cyrus may have announced early last month that she was taking a break from social media, but that doesn’t mean she plans to fall out of the limelight any time soon. Soon after Miley uploaded the video of herself dancing to J. Dash and Flo Rida’s track “Wop,” which first debuted nearly two years ago (believe it or not), the viral video already had more than 3,000,000 views on YouTube. And rapper J. Dash was just as surprised as the rest of us when he finally caught a glimpse of Miley’s “twerkin” video. “I was in the bed, laid out sick, and I got a phone call saying, ‘Hey, have you seen this video of Miley Cyrus?’ And I said, ‘Nah.’ I thought they were making it up. [Then] I actually got a message from Miley and we joked about getting matching unicorn tattoos.

“I had no idea she was going to do the video,” said J. Dash about Miley’s take on his “Wop” jam. “We had joked about, I knew she loved the record and I knew she was a fan but I thought that was the end of it.” Little did J. Dash know, that Miley Cyrus was such a big fan of the all-but-forgotten track that she was willing to don a unicorn onesie and twerk it out for the world to see. As a result, J. Dash has enjoyed renewed celebrity and his “Wop” jam has resurfaced as a catchy dance song that you’ll probably have stuck in your head for weeks to come. “The next day [it] was on Good Morning America and The Today Show,” said J. Dash about the aftermath of Miley’s twerkin video. “I really didn’t know what kind of power and reach that girl had until right there.”