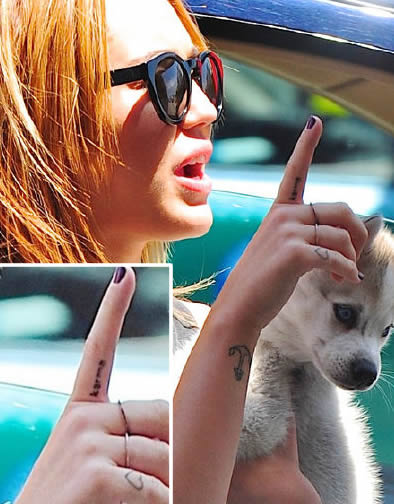 As Miley Cyrus gets more tattoos, we learn a little bit more about her character and beliefs with each new piece of body art. Miley Cyrus’ eighth tattoo features a single word inked on her right index finger reading “karma.” Although she hasn’t spoken much about this tat in public, we know how much Miley’s finger tattoo means to her. Do you know why she decided to get a tattoo representing the Hindu concept “karma” on her finger?

One of the four (that’s right, four) tattoos Miley Cyrus got in 2011 was another small tat inked on her finger. Miley Cyrus got a tattoo reading “karma,” inked in tiny black lower-case letters on the outside of her right index finger in July 2011. As Miley’s finger tattoo collection grows, her fans and the public in general have been wondering how long the teen star’s tattoo fetish will continue. Others, like acclaimed Hindu statesman Rajan Zed, have urged Miley Cyrus to go beyond the “fashion statement” that Hindu tattoos have become, and explore further the rich philosophical thought which Hinduism beliefs offer. According to Zed, he or other Hindu scholars would gladly provide Hinduism resources to help in her exploration and understanding of Hinduism.

Although the karma tat is one of Miley Cyrus’ less visible tattoos, it is probably one of her most meaningful. The concept of “karma” is pretty well known, meaning that what goes around comes around. For instance, if you do a good deed, something good will happen to you, but if you do a bad deed, something bad will happen to you. In addition to the Hindu concept of “karma,” Miley has also since had the Hindu “Om” symbol inked on her body in a wrist tattoo. Zed, who is president of the Universal Society of Hinduism, has said that Hollywood celebrities who get Hindu tattoos need to have more patience and go beyond the superficial, because Hinduism concepts have evolved over thousands of years and require deep study. Other celebrities with Sanskrit or Hindu tattoos include Rihanna, Jessica Alba, Tommy Lee and David Beckham. 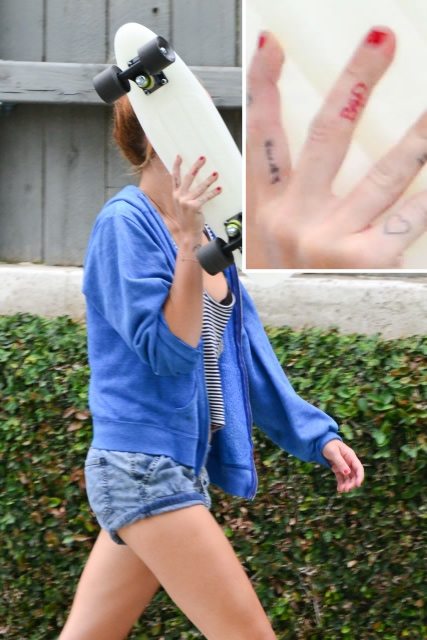 Last September, Miley Cyrus was featured on the cover of Prestige magazine, and told her interviewer, “The press seems to think that I’m trying to make this big turn and become a bad girl, and really I’m trying to be more connected with the Earth.” This side of Miley Cyrus was evident a few months prior to that interview when Miley tweeted, “Dear Universe, For my next life can I please come back as some form of marine life? Such a great day. The water makes me feel so free :)” Miley’s new interest in Hindu symbols and concepts has raised eyebrows, since she is a self-professed Christian. In fact, before her family moved to L.A. in 2005, they had Miley baptized in a Southern Baptist church as a sort of spiritual insurance policy against big-city life. It seems like Miley’s beliefs may be evolving though; as the star told Parade magazine, “My faith is very important to be, but I don’t necessarily define my faith by going to church every Sunday.”

In response to all the talk about Miley Cyrus’ so-called scandalous actions of late, Miley says, “I’m not some crazy lady who’s gone off the deep end, because I definitely haven’t. I just always try to be real.” She adds, “Every 18-year-old explores sexuality and experiments and tries things. For me there’s no reason to change that. You have to be true to yourself.” Miley has also spoken out against those who have questioned her Christianity, saying, “People are always looking for you to do something that is non-Christian. But it’s like, ‘Dude, Christians don’t live in the dark.’ I have to participate in life.” She continues, “If I wear something revealing, they go, ‘Well, that’s not Christian.’ and I’m like, ‘Yeah I’m going to go to hell because I’m wearing a pair of really short white shorts.’ Suddenly I’m a slut. That’s so old-school.” 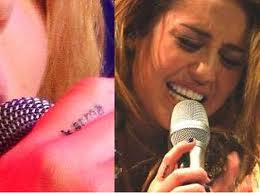 Although Miley Cyrus once said, “I could never get a meaningless tattoo,” it seems the teen superstar may actually be regretting one of her many pieces of body art. She was recently spotted outside of a laser tattoo removal office in Los Angeles, sparking rumors that the star may be getting rid of one or more her tattoos. Miley Cyrus first came to our attention as television star Hannah Montana, and many people have had a difficult time updating that image to reflect the successful 19-year-old pop star that Miley Cyrus is today. When the Hannah Montana show was in its last season in 2010, Miley said in an interview, “When I was 12, I thought, ‘I want to be famous all the time! I want everybody to recognize me!’” Miley has reportedly spent the past few years trying to figure out who she was, in the midst of sometimes severe criticism about her actions and the ways she portrays herself. “Now I just want to be chill and have my private life,” Miley confesses. “When they’re putting me in sparkles and pink this final season, I have to grit my teeth. I can’t breathe looking like that anymore.” The first Miley Cyrus tattoo showed up when the singer was 17, and we wouldn’t be surprised if a couple years of added maturity has made her change her mind about some of her tats as well.