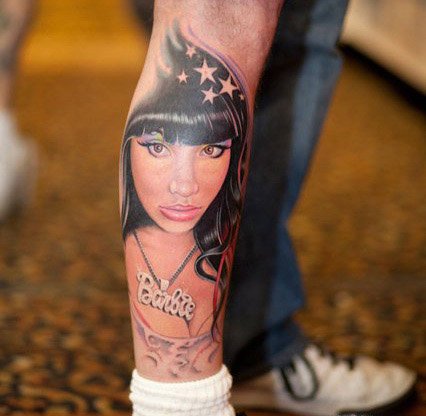 Nicki Minaj may be one and done with her own tattoos, but that hasn’t stopped some of the pop star’s most dedicated fans from getting inked in her honor. With all of her different alter egos, crazy hairstyles and flamboyant costumes, there’s plenty of material out there for cool Nicki Minaj fan tattoos, but most of the ones we’ve seen so far have been questionable, to say the least. On this note, we think the most interesting fan tattoos of Nicki tend to be the portrait tats, so we’ve included some here for your viewing pleasure. There’s no question that she has an awesome fan base, what with all the people willing to get her face permanently inked on their bodies, but whether the tattoos actually look like Nicki Minaj is another story…check ’em out!

Okay, now this is more like it. This fan also got a portrait tattoo of the pop star, but this one actually resembles the attractive singer. The fan tattoo is inked on the outside of this guy’s leg and features a pretty life-like image of a busty Nicki Minaj with black hair and a “Barbie” necklace around her neck. As true fans know, one of the quirky singer’s alter egos is Harajuku Barbie, the pop star’s feminine identity that encompasses everything girly about Nicki Minaj. This particular guy must be a pretty big fan of hers, because the tribute tattoo takes up the majority of his lower leg, reaching from just above his ankle all the way to his knee.

We’ve got to start off with the worst here. There’s something to be said for artistic freedom, but this person took a relatively normal Nicki Minaj image (of which there aren’t many) and ran with it…right off the deep end. The large fan tat is inked on this person’s upper arm/shoulder area and features an extremely creepy portrait of the pop star. The tattoo, which actually looks more like Lady Gaga than Nicki, portrays the singer with some interesting makeup, including a blue star on her chin, a blue scalloped design around her eyes and – the worst part – black lines on her lips that makes them look stitched closed. A bit of advice: if you’re going to get a fan tattoo that looks nothing like the pop star subject, don’t include a photograph. Then at least we don’t know what it was supposed to look like.

We’re going to have to go with another swing and a miss for this fan’s tattoo. The large tat is inked on the upper part of this person’s arm, and features a portrait of her that isn’t terrible in terms of the tattoo artist’s skill, but really looks nothing like the pop star. From the near absence of her nose to the slightly elongated face that makes her look a little horsey, it’s not the worst Nicki Minaj fan tattoo we’ve ever seen, but it’s definitely not the best. Good thing this dedicated fan included the name “Nicki Minaj” with a bunch of stars and swirly designs below the portrait, or we may never have figured out the inspiration behind this tattoo!