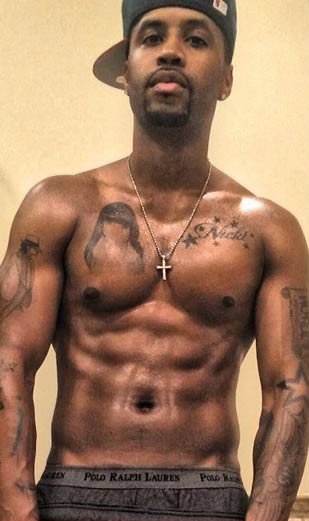 Rumors have been circulating recently that Nicki Minaj and boyfriend Safaree Samuels had called it quits, and we now have some hard evidence that there is in fact trouble in paradise for the duo – a couple of covered-up Nicki Minaj tattoos. Safaree Samuels, a.k.a. Scaff Beezy, made headlines back in November 2013 for getting yet another tattoo dedicated to Nicki Minaj inked on his arm, in addition to the two he already sported on his chest, but now both of those two chest tattoos have been covered up, according to new photos of the rapper from October 20. That is, in case a tweet from Nicki Minaj back in May that said “SINGLE N READY TO MINGLE” wasn’t proof enough that the two were having troubles…

Scaff Beezy, who has been called everything from Nicki Minaj’s assistant to her best friend, brother, boyfriend, sidekick, fiancé and supposed baby daddy, went under the needle last year for a pretty impressive portrait tattoo of Nicki Minaj on his forearm. The tat features the pop star sporting a bubble gum pink wig and showing off plenty of cleavage while holding her hands over her head and licking her right arm. Interesting as the portrait tat is, it wasn’t the first time Mr. Samuels had gone under the needle to show his dedication to the pop star. In addition to the forearm tattoo, Scaff Beezy also had a portrait tattoo of Nicki Minaj inked on the right side of his chest at an earlier date, and a tattoo of her first name surrounded by stars on the left side of his chest.

It seems now, that despite claims that Nicki Minaj and Samuels had simply had a small argument leading up to her “SINGLE N READY TO MINGLE” tweet but were still very much together, that they really are calling it quits. It was Scaff Beezy who put the rumors of a reunion to rest when he stepped out on October 20 with not one but both of the Nicki Minaj tattoos on his chest covered up with new ink. Instead of a portrait tat of a black-haired Nicki on his right pec, he now rocks a tattoo of what looks like a motorcycle helmet. In place of the “Nicki” tattoo on his left pec, Samuels now has a large tattoo of a rose and a heart-shaped lock with a key.

In the pics of Safaree Samuels, you can see that he still has the colorful portrait tattoo of Nicki Minaj on his forearm, but we’re guessing it’s only a matter of time before he covers up that one too!