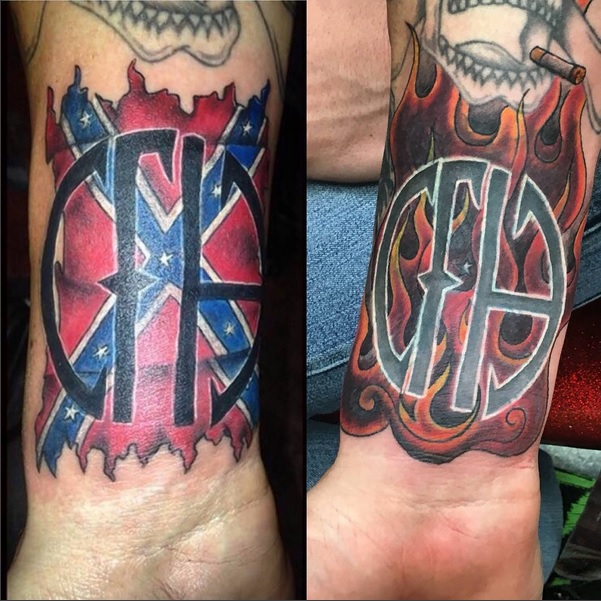 Paris Jackson has racked up an impressive number of tattoos over the past few months, but she isn’t the only one who’s gone under the needle lately. The 18-year-old’s drummer boyfriend, Michael Snoddy, also got a new tattoo recently, and the fresh ink covers up the Confederate flag tattoo on his arm that Paris’ family has called “racist” ever since they started dating. Michael Snoddy has defended his Confederate flag tattoo in the past, claiming that the ink is a tribute to the band Pantera, which previously used the flag in much of its advertising, posters and merchandise.

Last week, apparently deciding that it was time for his Confederate flag tattoo to go, Michael Snoddy hit up Justin Lewis, a tattoo artist at Timeless Tattoo in Hollywood, for a cover-up job to replace the ink with a more appropriate tattoo of a wall of flames. Paris Jackson is also a fan of Justin Lewis’ work, and commissioned the artist to ink many of the tattoos she has had done since turning 18 in April, including the feathers tattoo behind her ear, the “BAD” ink on her hand, and the intricate tattoo of Michael Jackson’s Dangerous album cover art on her arm.

Justin Lewis posted a before and after photo of Michael Snoddy’s tattoo to his Instagram account on October 10, captioning the pic, “Cover up on my buddy @michaelsnoddy love ya brother.” In the photo, you can see Snoddy’s old tattoo, a tattered Confederate flag with a monogram of the initials “CFH,” which is a reference to Pantera’s Cowboys from Hell album. In the new piece, the offending flag has been replaced by a wall of black, orange and red flames, which appear to be coming from a new cigarette protruding from the mouth of the drummer’s old skull tattoo. The “CFH” initials remain in place. 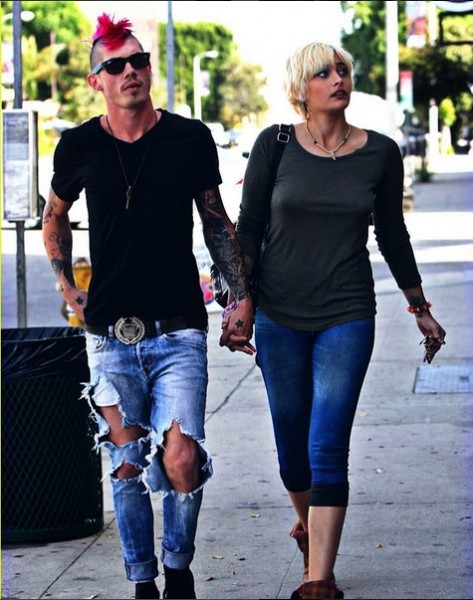 It’s about time Michael Snoddy covered up his Confederate flag tattoo, a piece that Paris Jackson’s family has been concerned about ever since the two began dating earlier this year, being that the flag is a symbol of the Confederacy that advocated human slavery during the Civil War, and Paris’ father, the late Michael Jackson, was black. Snoddy faced some serious criticism last year, when he first had the Confederate flag tattoo done, with some people claiming he was racist. The drummer hit back at critics, claiming that he has wanted the Confederate tattoo since middle school, and, since he and Paris have been romantically linked, “wouldn’t be dating a black girl if he were racist.”