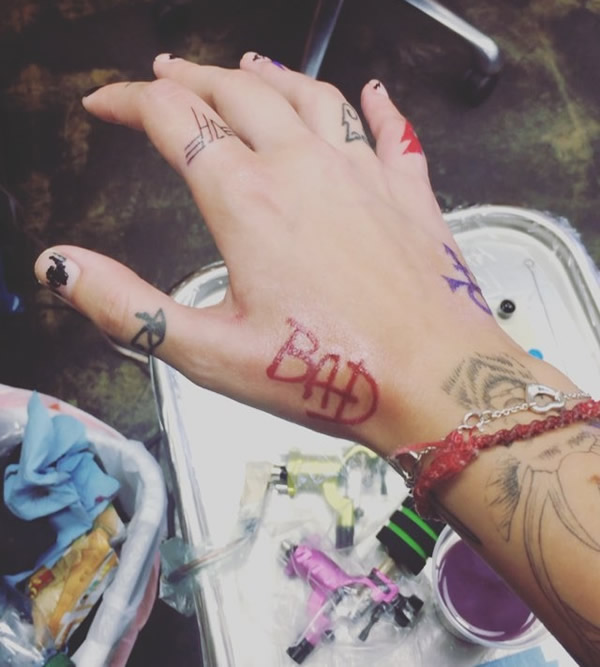 Paris Jackson has been busy adding tons of fresh ink to her right hand over the past few months, and she finally debuted the finishing touch on Instagram this week – a bold new “BAD” tattoo done in red ink on the left side of her hand, between the base of her thumb and her wrist. Paris Jackson’s “BAD” tattoo, the latest of several tattoos she has gotten recently honoring her late father, Michael Jackson, was inked on July 10, by Justin Lewis, an artist at Timeless Tattoo in Los Angeles, California.

Similar to the small, red “BAD” tattoo Miley Cyrus had inked on her finger in 2012, Paris’ new hand tattoo was inspired by Michael Jackson’s third album, Bad, released in 1987. Paris revealed her new “BAD” hand tattoo in a video clip posted on Instagram, which she captioned: “right hand finally finished!! I fucking love you @dermagraphink @vanhalen @prince @michaeljackson @davidbowie.” In case you’re wondering why Paris tagged Van Halen, Prince and David Bowie in her post, it’s because the 18-year-old also has tattoo tributes to those legendary musicians inked on the same hand.

On the right side of her right hand, Paris Jackson has Prince’s signature, unpronounceable symbol inked in purple, and on the ring finger of that same hand, up near her fingernail, she has three rain drops also done in purple ink – a nod to Prince’s iconic song, “Purple Rain.” Paris is obviously a big fan of Prince, who passed away unexpectedly in April 2016, at the age of 57. On her right-hand pinky finger, the 18-year-old has a red lightning bolt commemorating the Ziggy Stardust alter ego of David Bowie, who died from cancer in January 2016. 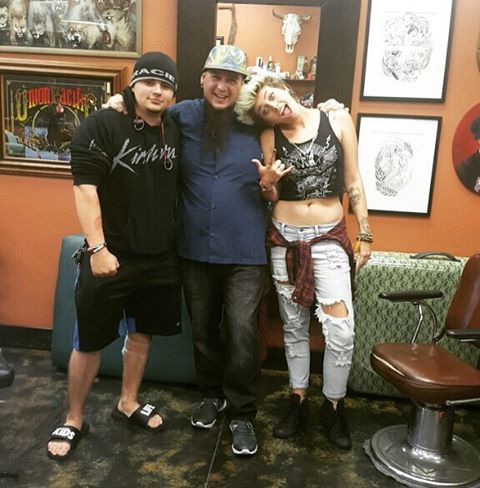 Van Halen is also represented on Paris’ carefully-decorated right hand, in a tattoo of the band’s iconic “VH” logo inked in black on her index finger. Not many people may be able to identify the other tattoo that Paris got on her right-hand ring finger, along with her Prince purple rain tattoo, but true Michael Jackson fans will recognize the stylized “MJ” logo that was part of the artwork from the singer’s 1995 album, HIStory.

To finish off the artwork on her right hand, Paris rocks a tattoo on her thumb of the Eye of Horus, an ancient Egyptian symbol of protection, good health and royal power, which definitely ties into the rest of her hand tats. Paris Jackson has been going crazy with the tattoos since she turned 18 in early April, and her latest “BAD” tattoo marks at least four permanent pieces of body art dedicated to her late father.