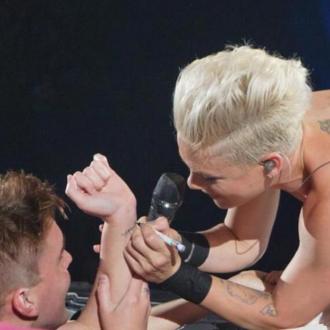 One lucky Pink fan hit the jackpot last month, when the singer took time in the middle of a live show in Sydney to mark her signature on his wrist. He didn’t stop there though; the Australian super-fan took that wrist of his directly to a tattoo shop and had Pink’s signature permanently inked on his arm before it could wash off. Apparently he was so determined to get Pink’s signature that he went to three of her shows, hoping that she would sign his arm. He even booked the tattoo session ahead of time, just in case it all worked out. Now that’s dedication!

Following the tattoo session, the Pink fan, who tweets under the handle AustralianPinkFans, posted a picture of his arm being signed by Pink mid-song, along with the caption: “@Pink thank you for making my dream come true in Perth! Love my tatt! #FanBoy xo.” To his complete surprise, Pink herself retweeted the message and added the caption, “noooiiiiiiiiice :)” showing that she isn’t too much of a superstar to appreciate some genuine fan love. This caused AustralianPinkFans to lose his mind a bit though, and he followed up with a series of messages, including, “SHE TWEETED ME OMG OMG AHHH. I’ll definitely be having Pink dreams tonight!! Love & light xx.”

Pink is currently on her The Truth About Love tour across Australia, and, judging by her own collection of tats, we are guessing the 34-year-old singer would approve of this die-hard fan’s signature tattoo. After all, Pink’s tattoos so far number in the 20s, and, while the ink is scattered all across her body, she has some of her most important pieces on her arms. Now Pink’s number one Australian fan has an important tattoo on his arm too, which, we have to say, is way better than getting some lame Justin Bieber lyrics inked on your leg and then having a Bieber look-a-like offer up a replica signature. Not even the real deal!