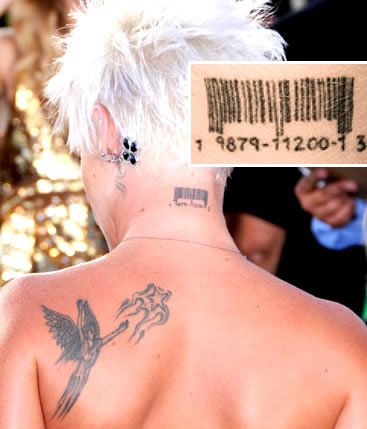 Most women choose to get neck tattoos because they are relatively discreet and can typically be hidden by simply letting their hair down. With her signature short ‘do however, Pink’s neck tattoos are just as visible as the rest of her tattoos, and they are equally as interesting. We hear that neck tattoos are usually the most painful tattoos you can get (Nicki Minaj can attest to that, actually), so the fact that Pink sports two tats on very bony sections of her neck is a testament to the pop star’s pain tolerance and love for tattoos. Pink has more than a dozen tattoos already, and she plans on getting more in the future. In fact, Pink says there is only one tat she wouldn’t get – a tattoo of husband Carey Hart’s name. Pink has numerous tattoos on her body dedicated to her hubby, but apparently getting his name inked on her body isn’t an option. That leaves plenty of room for other tattoos though!

One of Pink’s most unique tattoos is the bar code tat inked directly in the middle of the back of her neck, just below her hair line, which she calls her “M!ssundaztood present.” Pink’s bar code tattoo is inked in black and white and features a traditional bar code image with the numbers “1 9879-11200-1 3” inked below. The outside numbers on Pink’s neck tattoo stand for her lucky number, 13, while the rest of the numbers are equally as important to the pop star. The “9879” stands for Pink’s birth date, September 8, 1979, and the “112001” represents the release date of Pink’s M!ssundaztood album: November 20, 2001. Pink’s tattoo on the back of her neck must have been pretty painful, but the pop star seems to enjoy that aspect of getting inked. “You’re always pumped up after a show, so the perfect way to come down is pain,” Pink laughingly said in an interview, referring to her tendency to get tats after a show. 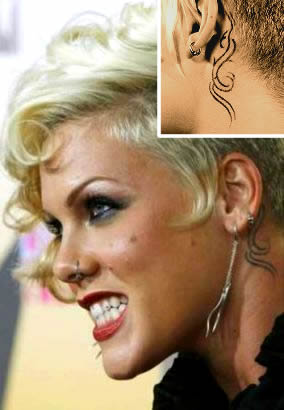 Another one of Pink’s neck tattoos features a tribal design inked in black behind her left ear. Pink’s tribal tattoo looks almost like a series of swirled vines, inked from the just behind the top of her ear, extending down to her neck. Pink’s tribal tattoo on her neck is rumored to be designed after a music note, which would make sense considering the fact that music is such a huge part of Pink’s life. If that’s the case, Pink isn’t the only pop star to get a music-inspired tat on her body. With her neck tat, Pink joins the ranks of tatted-up celebrities like Rihanna, Selena Gomez and Lady Gaga, although RiRi and Gaga have both since covered up their music note/treble clef tats with new ink. Justin Bieber has also paid tribute to his music career with a Japanese kanji tattoo meaning “music” on his arm and a “Believe” tat inspired by the title of his most recent album.