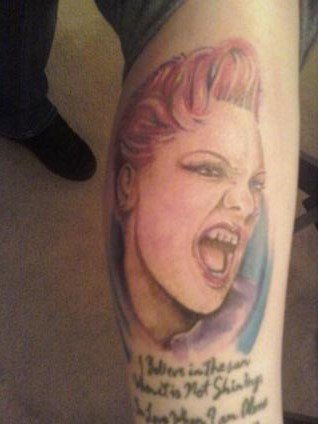 Getting a portrait tattoo dedicated to your favorite pop star is probably the single most effective way to prove you’re their #1 fan. I mean, why else would you pay good money to have someone else’s face permanently inked on your body unless you are completely and totally devoted to them and plan to be, well, for the rest of your life? What crazy-devoted Pink fans don’t seem to realize though, is that, unless tribute tattoos are really well-done or are super flattering in some other way, they usually just end up being kinda creepy. Case in point – these three tats on some die-hard Pink fans.

A little color goes a long way towards making this Pink fan tattoo slightly more attractive…if it weren’t for those damn teeth. Pink is pretty well known for her dazzling smile, and even though this portrait tattoo does a decent job of capturing the pop star’s signature “I’m a bad-ass” facial expression, we just can’t help but notice the nubbins Pink has in place of teeth in this tattoo. Other than that, the pink hair is a nice touch, as is the addition of the lyrics below the portrait…even though the lyrics aren’t Pink’s. “I believe in the sun even when it’s not shining” is either an Irish saying or the lyrics from the song “I Believe in Love” by Barlow Girl.

Next is a black and white Pink tattoo on the back of Gail Kolak of Melbourne, Australia. The gigantic fan tattoo features Pink’s portrait, with what appears to be angel’s wings protruding from her neck area. There’s just something angelic about Pink’s face in this back tattoo, which shows the singer looking up towards the words “You’re my crack of sunlight” – lyrics from her hit song “I’m Not Dead.”

In the song, Pink sings, “I’ve tried to hide my scars from you / I’m not scared just changing / Right beyond the cigarette and the devilish smile / You’re my crack of sunlight.” Underneath the image of the angelic/devilish pop star is the name “P!nk” with her signature stylized “i.”

Seeing their face inked on the body of a fan must be sort of like an “I made it!” moment for some singers, but it’s probably more like a “WTF?!” moment for others. We can’t even begin to imagine what this fan was thinking when they got a zombie Pink portrait tattoo, and we are dying to know what Pink thought when she first saw it (cause you know she’s seen it). 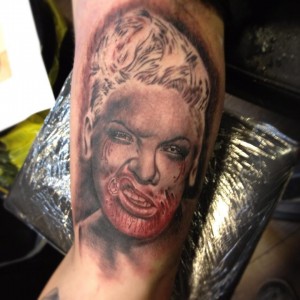 The tattoo isn’t terrible from the forehead up – although Pink’s hair looks more like a haystack – but the rest of the tribute tattoo is just plain horrifying. Obviously inspired by some creepy zombie fantasy, the Pink tattoo depicts the beautiful singer with a bloody, decaying face, her teeth showing through a hole in her cheek.  Weird.