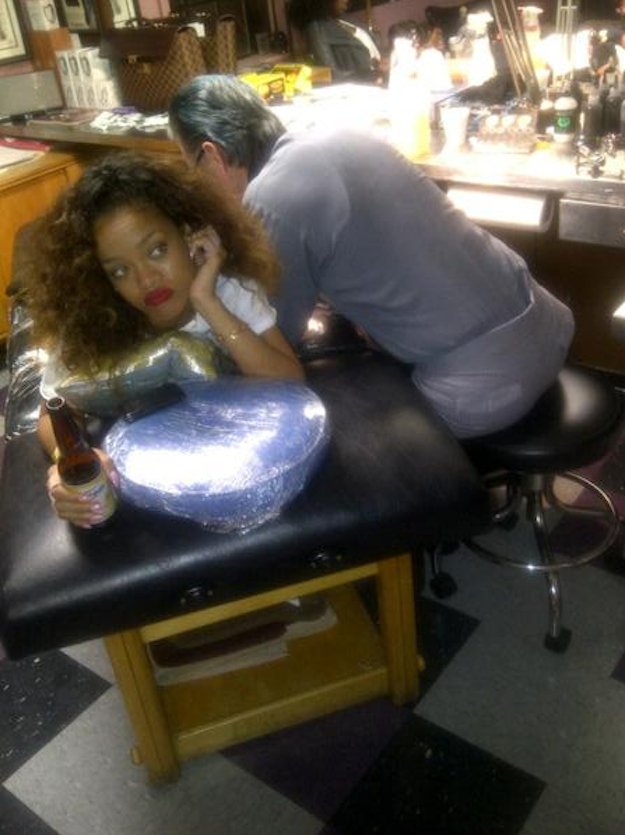 Rihanna has kicked off 2012 with some new body art! The Bajan beauty posted pictures of herself getting what appears to be two new tattoos earlier this evening, compliments of tattoo artist to the stars, Mark Mahoney. Pictures of Rihanna’s tattoos show her impressive tribute to the late Tupac Shakur in the form of a “Thug Life” tattoo inked across her knuckles. The tat was inked at Mahoney’s Shamrock Shack tattoo parlor in Los Angeles today, January 25, 2012. And just to make it a little different, Rihanna went with white ink for her thug life tattoo, instead of the traditional black. This is all well and good, but what has captured our interest even more is the photo of the songstress laying on her stomach while Mahoney seemingly adds another tattoo to Rihanna’s lower back.

What is Rihanna’s New Back Tattoo?

In addition to the pictures of her new thug life tat, Rihanna posted on Twitter today, “All these bitches screaming that 2pac back #THUGLIFE,” which are lyrics from the song “Tupac Back” by Rick Ross. In another tweet, Rihanna writes “Tat my f*** name on u girl so I know its real #MINE,” which is a tribute to Drake’s song “Free Spirit,” also featuring Rick Ross. In the song, Drake mention’s Tupac’s girlfriend Kidada Jones, who used to have a tattoo of Tupac’s face on her arm. Could Rihanna’s new back tattoo have something to do with this song? Or could it be a reference to the tattoo Rihanna’s on-again, off-again boyfriend Chris Brown got of then-girlfriend Karrueche Tran’s face? That sounds more like it!

Pictures of Rihanna’s Back Tattoo

Although everyone is dying to see pictures of Rihanna’s mysterious back tattoo, the only one the singer has posted so far shows her laying on her stomach while Mahoney works on her lower back. Rihanna hasn’t yet released any photos of what the lower back tattoo looks like, but as she sips on a beer and gets her 15th and 16th tats, it appears that the superstar is starting off 2012 right! And with the addition of two new tattoos to her collection, Rihanna is well on her way to joining the ranks of other majorly tattooed celebrities like Angelina Jolie and Miley Cyrus.