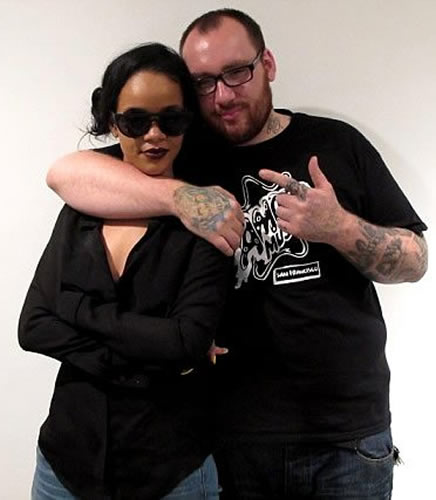 In an exclusive interview with Heat magazine published on May 20, celebrity tattoo artist Keith “Bang Bang” McCurdy spilled the beans about his recent tattoo rendezvous with Rihanna and model friend Cara Delevingne, and revealed some juicy info about an upcoming tattoo for Rihanna in the process. Although Bang Bang didn’t divulge any specifics about the Rihanna tattoo, he may have hinted at the location with a sneaky little tattoo reference. Shortly after bringing you all the news about Rihanna’s new Goddess Isis tattoo on her chest last September, we shared some insider info about RiRi’s potential plans for a “cute and sexy” back tattoo. Now Bang Bang says Rihanna “has big plans for another tattoo.” Could the pop star’s back tattoo finally be in the works? Stay tuned and we’ll give you the inside scoop!

During the recent interview, Bang Bang dished on his professional relationship with the inked-up Rihanna, Rita Ora and their mutual friend, Cara Delevingne, who got an awesome lion tattoo inked on her finger by Bang Bang just last week. Rita Ora also got a Bang Bang original recently, revealing a pretty dove inked on the back of her neck on May 7. According to the tattoo artist, Rihanna left him a funny message on his phone and mentioned something about doing a new tattoo. So, Bang Bang gathered up his equipment and headed to the Gansevoort Park Hotel in Manhattan with plans to ink Rihanna, only to find out Cara was the one getting a tat! Surprisingly, RiRi didn’t opt for a new tattoo that night, and instead watched a basketball game while Cara got her first-ever tattoo in Rihanna’s hotel room.

Rihanna Will Be BACK for Another Tattoo…?

We were glad to get some more info from Bang Bang about Cara’s lion tattoo – which is inked on the top of her index finger – because the tiny tat is so incredibly detailed and awesome. According to the tattoo artist, “It was a photo reference from a real lion that I mapped out, I translated it so it works small, so you have to think about the aging process, because fingers don’t fade perfectly. I altered the image on the fly.” Have you all seen Cara’s lion tattoo yet?? Seriously, this guy is a pro. At the end of the interview, Bang Bang said something that really shouldn’t surprise us anymore: “Rihanna has big plans for another tattoo!” Still, we’re super excited, and Bang Bang said that he can even reveal where it’s gonna be, followed by this little nugget: “she said when her tour is done, she’ll be back.”