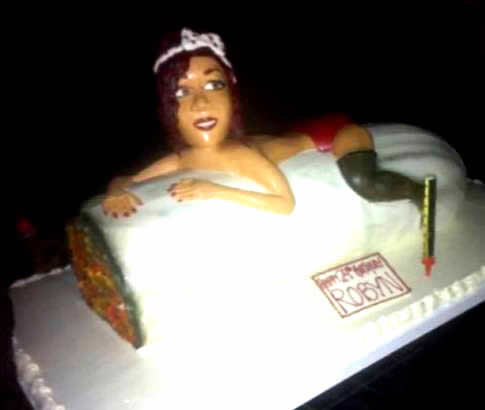 Rihanna’s birthday is coming up on February 20, and we’re curious if the pop star will celebrate the big 2-5 with a new tattoo! RiRi has already covered her body (but in a curiously elegant and discreet way) with well more than a dozen tattoos, ranging from Sanskrit prayers and inspirational mantras to tats repping the pop star’s “Thug Life,” so we wouldn’t be surprised if RiRi gifted herself some new ink for her birthday. Rihanna certainly doesn’t need an excuse to get some new ink – which is obvious since she has added five new tattoos to her collection since her last birthday – but turning a quarter-century is definitely a cause for celebration, right? And what better way to celebrate the occasion, RiRi-style, than to get a new tattoo?

If you’re not sure when Rihanna’s birthday is, just take a look at gal pal Melissa Forde’s Roman numeral tat. You’ll see that our girl RiRi was born on February 20, 1988, which means she’ll be 25 in less than two weeks. Among other big changes that have occurred since RiRi turned 24 last year, the pop star and on-again, off-again boyfriend Chris Brown will officially be back together during this birthday, which can only mean RiRi’s 25th birthday will probably be even crazier than the last (which featured a cake modeled after a giant spliff with an icing-replica of Rihanna riding it). At least this year, Chris Brown doesn’t have to force party-goers to sign confidentiality agreements regarding his presence at the soiree, since he doesn’t have to hide from Karrueche Tran anymore.

Rihanna is One Successful 25 Year Old

The international superstar known as Rihanna is one bad-ass chick, and when she does something, she doesn’t do it half-way.

Since RiRi first hit the scene nearly a decade ago, she has released seven studio albums in as many years, with the last six selling more than a million copies each; she has been named the sexiest woman alive, the most popular star on Facebook and the most downloaded artist…ever; she has reached close to three billion views on YouTube; she has gone under the needle 20 times; she has established a multimillion-dollar enterprise; and much, much more – all before the age of 25. During a December 2012 interview with GQ, Rihanna said, “Sometimes a person looks at me and sees dollars. They see numbers and they see a product. I look at me and see art. If I didn’t like what I was doing, then I would say I was committing slavery.” (She also mentioned in that interview that she almost got a face tattoo the previous night).

Rihanna is an animal, unfiltered, a little strange, maybe even a little unhinged, but she knows how to work it. She’s talented, she’s infectious, she loves tattoos and she’s here to stay. So what’s left to say but, Happy Birthday Rihanna!