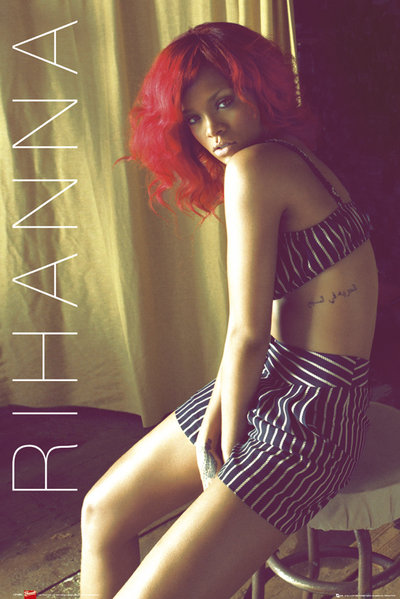 Talk about a glamour shot! This pic of Rihanna’s Arabic side tattoo and tribal hand ink is super hot, especially with her accompanying siren-red locks. Rihanna just has this way about her, where she can pose in a hunched-over position without showing off all that much skin and still look like a goddess. Maybe it has something to do with her incredible body and stunning hazel eyes. Either way, this photograph does a great job of showing off two of Rihanna’s tattoos – her Maori hand tat and Arabic side tat.

Shown in this photo are two of Rihanna’s tats that have drawn the most attention from the public, the Maori-inspired dragon claw on her right hand and the Arabic tat inked on her left ribcage. The way this photo shoot was set up really shows off the sultry side of the edgy and stunning superstar, making us crave much, much more! Even though you can’t see them in this pic, Rihanna has several more tattoos inked on her body, including one on the inside of her ear, two on her fingers, one on her neck, one on her shoulder, and many more.

Rihanna’s sexy side tattoo is an Arabic-inspired tat reading “Al-Hurria fi Al-Maseeh,” which translates to “Freedom in God.” The Barbados babe got this tattoo in 2008 and is one of the few religious tats she has inked on her body. Since Rihanna’s Arabic tattoo is located right on her ribcage, it probably hurt like hell. But we’re going to assume that having a tat on her ribcage prompts her to do photo shoots like this more often, and hey, we’re certainly not complaining.

One of Rihanna’s coolest and most unique tattoos is the Maori design inked on her right hand and wrist. The ornate dragon claw tat is true to the traditional Maori style of tattooing, which involves imprinting grooves on the hand using chisels, making the tat rough and raised instead of smooth like most modern tattoos inked with a needle. Rihanna’s hand tattoo represents love and strength, and brings new meaning to the notion that love is pain. This definitely isn’t your grandma’s hand tattoo!