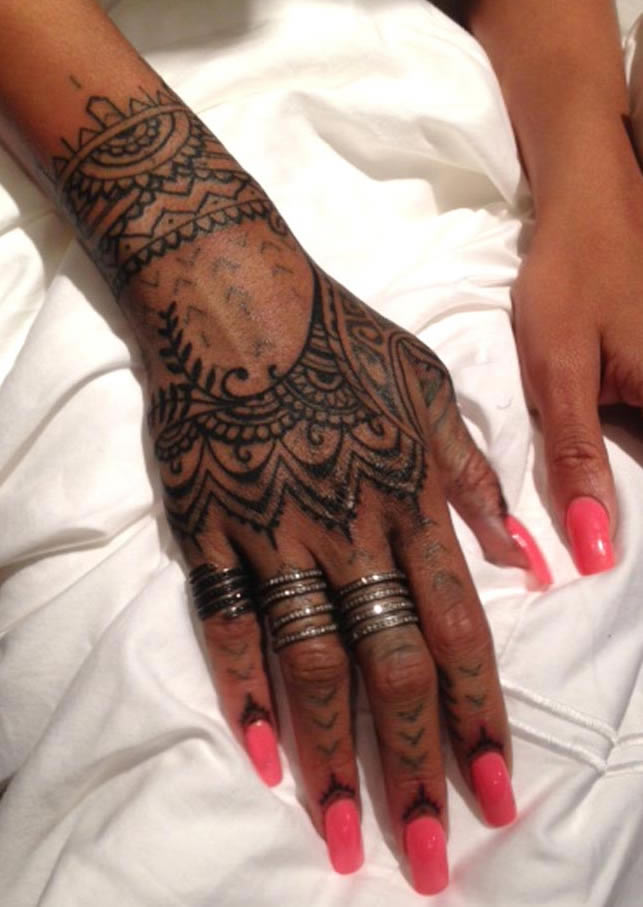 Just a few weeks after debuting the extensive (and painful) Maori tattoo she had inked on her right hand in New Zealand, Rihanna apparently decided she wasn’t completely happy with the ink, because she flew her go-to tattoo artist, Bang Bang, out to the Dominican Republic over the weekend to cover it up with a new tattoo! Pictures of the new Rihanna tattoo cropped up online on October 30, 2013, and show an impressive henna-style design covering up the traditional tribal tattoo she had done by tattoo artist Inia Taylor earlier this month, during the New Zealand leg of her Diamonds world tour. Rihanna’s Maori tattoo was inked in traditional Maori Ta Moko fashion, which means the ink was imbedded in her skin using a mallet and chisel…that means no easy tattoo removal for this girl!

Although Rihanna seemed pretty pleased with the tribal hand tattoo when it was just completed, it’s not hard to imagine why the pop star may have fallen out of love with the ink. The prominent Maori tattoo consisted of a series of small black lines and arrows on the back of her right hand, extending from the tips of her fingers all the way past her wrist. According to the website for Moko Ink, where RiRi’s covered-up hand tattoo was inked, “The language of Ta Moko is used to design a unique piece of body art expressing aspects that relate to the wearer. All our art is custom designed for each person on a consultation basis.” Even though RiRi’s tribal tattoo was designed specifically for her, she wasn’t thrilled with the finished result. So, on October 27, 2013, RiRi decided to do the only thing that made sense – she covered it up with another tattoo!

For the tattoo cover-up, Rihanna was reportedly looking for something more feminine, and had Bang Bang and his associate Cally-Jo ink a bold henna-style tat on the back of her right hand, running from the tips of her fingers to her wrist. The design took an incredible 11 hours and features a feminine and intricate design that looks almost like lace. Rihanna’s hand tattoo is inked in black and blends in nicely with the tribal tattoo she didn’t like, while also complimenting the first Maori hand tattoo RiRi had done in New Zealand back in 2008. After the exhausting session, Bang Bang spilled the beans about the inspiration behind Rihanna’s tattoo, saying, “She had something pre-existing on her hand, so it was a little bit of a cover-up, but also making it look good, wanted to make sure it flowed. The inspiration was henna art. We wanted something really decorative, feminine and sexy.”

Prior to getting inked, Rihanna hinted about a new tattoo when she tweeted the following message: “This kinda party tonight!! @bangbangnyc @calljoart #ink,” earlier in the evening, accompanied by a photo of numerous tattoo guns. After Rihanna’s new hand tattoo was revealed, Bang Bang told E! News, “Ri flipped out. Absolutely loved it, loved it. It’s a hard thing when you get a tattoo and not absolutely love it. It’s uncomfortable to have something on your hand, especially when it’s in such a visible spot, and she’s such a visible person.” So Rihanna got a crazy big tattoo on her hand and didn’t like it, so she had to get an even bigger and crazier tattoo to cover it up just a few weeks later…Let’s just say, it may be a while before Rihanna trusts another tattoo artist besides Bang Bang!