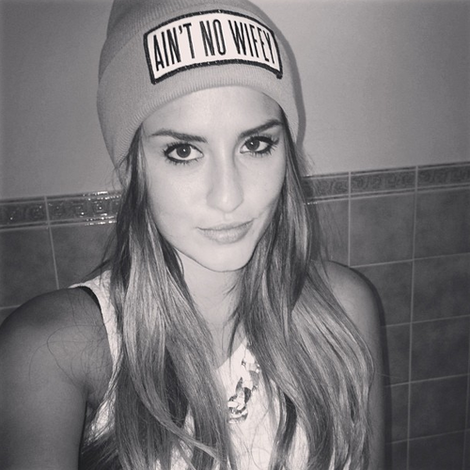 Rihanna infamously got inked with a tiny gun tat on her ribcage in the midst of Chris Brown’s 2009 assault charges, and now reality star Lucy Watson has followed suit with a similar black gun tattoo on her arm. Lucy took to Instagram to show off her new gun tattoo on April 16, 2014, captioning the photo of her fresh ink “New tat #pow.” And while Lucy’s gun tat isn’t quite as controversial as Rihanna’s tattoo, which the pop star said at the time represented strength and power, the reality star may have decided to show her gangsta side for the very same reason – to prove to the world that she isn’t so “sensitive,” despite recent comments made by cast-mate and on-again, off-again boyfriend, Jamie Laing.

During a recent session with his “Made in Chelsea” diary cam, Jamie had this to say about the woman he calls the love of his life: “I’m hoping that maybe I can wear down Lucy and break through that tough exterior. She’s actually very sensitive – she’ll hate me saying this. Sometimes I’ll hide outside her window and hear her cry.” Well, Jamie, Lucy may not be quite as “sensitive” as you think, judging by her bad-ass new gun tattoo, and I’d watch what I said about her in the future, if you know what we mean!

Back in 2009, when Chris Brown was booked on assault charges for allegedly abusing Rihanna in a car outside the Grammy Awards, Rihanna revealed her tiny new gun tattoo in the midst of all that mess and immediately received backlash for the “violent” ink. Tattoo artist Bang Bang was quick to come to RiRi’s defense though, insisting that the gun tat simply represented strength and power at a time when the singer was struggling with feelings of intense vulnerability. Albeit on a much smaller scale, we think Lucy Watson’s gun tattoo on her left forearm also represents power and strength for the reality star.

Some people are speculating about whether Lucy Watson’s tattoo is the real deal, but this isn’t the first time the actress has gone under the needle to make a point. After breaking up with boyfriend Spencer Matthews last year, Lucy showed off an ironic tattoo on the back of her neck that reads “In love we trust.” Real or not, we are loving Lucy Watson’s gun tattoo!