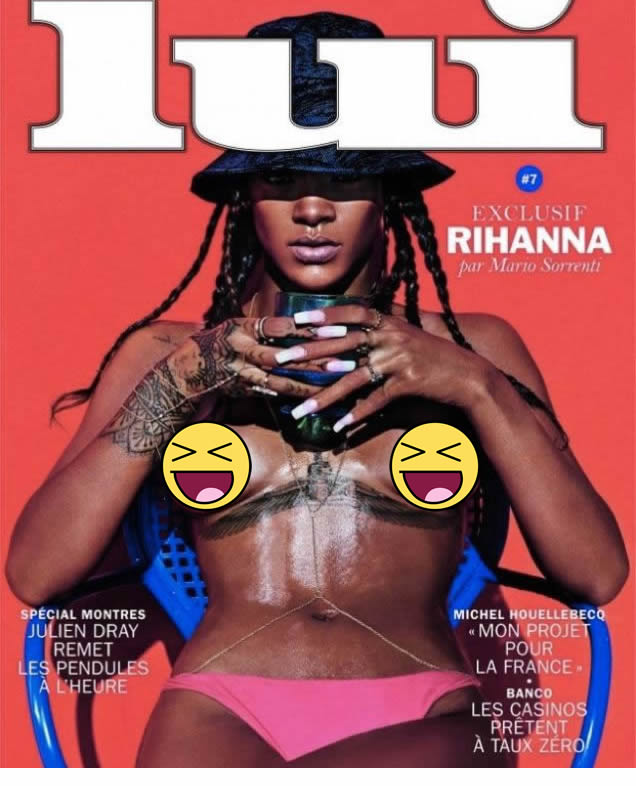 If you caught a glimpse of Rihanna’s cover for Lui magazine, which is France’s answer to Playboy, you’ll see (among other things) that the pop star has taken a break from tattoos to get her nips pierced! RiRi’s sexy magazine cover hit newsstands on April 30, and while the Barbadean beauty donned a pair of hot pink bikini bottoms, a blue and black hat, and some gold body jewelry, she left her top completely exposed, showing off the Goddess Isis tattoo on her chest, her henna-style hand tattoo and a silver barbell piercing in each of her nips.

Rihanna’s cover photo was shot by photographer Mario Sorrenti, who is best known for his risqué spreads of models in both Vogue and Harper’s Bazaar, and now his work is on display on the cover of Lui, a recently relaunched French magazine that rivals Playboy in every way, shape and form. Funny thing is, when images of Rihanna’s photo shoot with Sorrenti were first captured, the rumor was that the singer was to appear in Playboy, which has tried time and time again to convince the 26-year-old singer to grace its pages.

Despite its popularity in the past, Playboy today is widely seen as a disintegrating brand, and the fact that RiRi turned down the American men’s magazine in favor of Lui says a lot about how the pop star sees herself. We all know that Rihanna is confident when it comes to showing off her body (and her many tattoos), but Lui‘s more artistic approach to showing celebrities in the buff obviously appealed more to the singer than taking off her clothes for Playboy.

“If I’m wearing a top, I don’t wear a bra. If I’m wearing a bra, I just wear a bra,” Rihanna stated during an interview with Vogue earlier this year, reiterating a fact we all already know…that Rihanna prefers to leave little to the imagination when it comes to what she wears. And while RiRi definitely dons more clothing on a daily basis than she’s wearing on the cover of Lui, she never misses an opportunity to show off her awesome collection of tattoos!