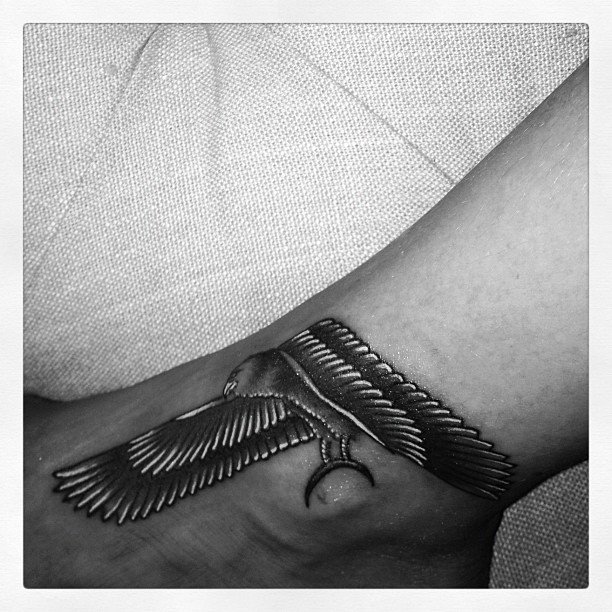 True to her bad-ass style, Rihanna took to Twitter on June 16, 2012 to share with fans a new tattoo – an Egyptian falcon that appears to be in the shape of a gun. Apparently, Rihanna commissioned tattoo artist to the stars, Keith “Bang Bang” McCurdy (who is responsible for many of Rihanna’s tattoos) to ink a pretty impressive falcon image on the inside of her right ankle while she was enjoying personal time off from her tour to visit with friends and family. But that’s not all! The pop star’s tat appears to have been inspired by a 2,300-year-old faience falcon that is on display at the Metropolitan Museum of Art in New York City. When placed side by side, the Egyptian falcon and Rihanna’s ankle tat are nearly identical. RiRi also used the falcon to cover up her very first tattoo – a treble clef and music note on her foot. So what’s the deal with this new ink?

Is Rihanna Obsessed With Guns?

Okay, so we’re not surprised that Rihanna’s ankle tattoo is in the shape of a handgun, right? After all, she already has a tiny gun tat inked just below her right armpit, and probably would have opted for the double-gun shoulder tattoos that she really wanted if she hadn’t been chosen as a CoverGirl model beforehand. She was also recently spotted on a beach in Hawaii sporting a huge (but fake) gun tat on her right thigh, which turned out to be part of her get-up for the summer flick Battleship. Truth be told though, the fact that RiRi’s ankle tat looks like a gun may only be a coincidence, considering the tattoo is almost an exact replica of a ceramic Egyptian falcon artifact, circa 380-342 B.C. But, when it comes to tattoos, it’s hard to believe that Rihanna does anything that isn’t completely deliberate.

So if Rihanna’s falcon tattoo isn’t just a cryptic excuse to get another gun inked on her body, then what’s the story? RiRi’s first tweet after getting the new ink – “Falcon sh!t!!!!” – doesn’t quite clear things up, but her second post does: “Falcon: a light that shines in the darkness! Never close their eyes during sleep.” 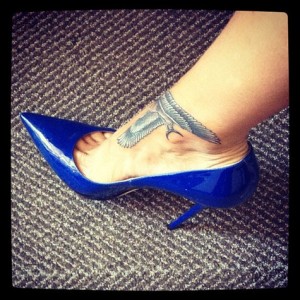 The singer’s interpretation appears to be that the falcon represents something positive in the midst of darkness, a light at the end of the tunnel, so to speak. Another interpretation of Rihanna’s new tattoo, which features a falcon that never closes its eyes, could be that she is always on the lookout, always watching. Could this have anything to do with her trouble involving former flame, Chris Brown, or the recent nightclub altercation between Brown and Drake that seems to have been about the songstress? Whatever her inspiration behind the ink, the singer’s tattoo of a black and white Egyptian falcon is pretty bad-ass, and joins many other awesome tats.