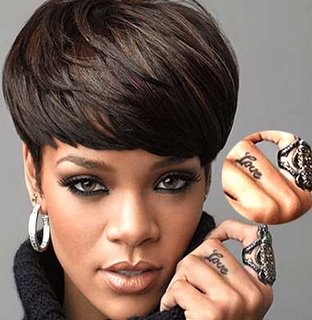 A theme we have seen repeated in many of Rihanna’s tattoos is now spelled out for us on the middle finger of the singer’s left hand. The word “Love” is inked in simple cursive writing on the side of Rihanna’s middle finger, so it is just barely visible when she is making a fist. The tattoo can be perfectly seen though when Rihanna say, gives the “peace” sign. Maybe she figured she could skip a step and give peace and love at the same time. Or maybe she wanted to be able to tone it down a bit when flipping someone the bird. We’ll leave the speculation about Rihanna’s tattoo meaning to you.

Story Behind Rihanna’s Love Tattoo on Her Finger

Rihanna’s love tattoo was inked in L.A. in 2008 by an artist that the superstar has used before – presumably Keith “Bang Bang” McCurdy. Rihanna’s finger tat is chic and tasteful, like many of her other body tattoos. It’s obvious that Rihanna loves tattoos but she recommends that no one get a tattoo on their finger. It must have hurt like hell! The love tattoo isn’t the only one of Rihanna’s finger tattoos, though. The pop princess also got the word “Shhh…” tattooed on the index finger of her right hand the same year. I guess the pain was worth it!

Many of Rihanna’s tattoos are discrete and tasteful, and the singer’s love finger tattoo is no exception.

Even looking at pics of Rihanna’s tattoos, it may be hard to make out the small “Love” imprinted on the Barbadian beauty’s finger. Fans hope that by checking out her new tattoos, they can learn a little more about RiRi, the superstar. Although the meaning of Rihanna’s love tattoo is somewhat of a mystery, the singer clearly isn’t afraid to show us some love!