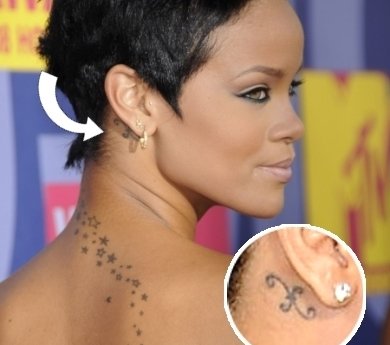 The second of Rihanna’s tattoos is a Pisces sign located just behind her right ear. The tat was done in 2006 by a famous Brazilian artist who typically books three years in advance! Lucky for Rihanna, the tattoo artist was in Tokyo at the same time as the pop star, so she took advantage of the good opportunity and didn’t even have to wait! Rihanna’s neck tattoo of the Pisces sign is a stylized black “glyph” – an H-shape in which the two vertical lines bend toward one another in the middle, while bowing out at the tops and bottoms. This simple yet stylish Pisces tat is yet another example of how much Rihanna loves tattoos.

The meaning of Rihanna’s pisces tattoo is clearly a celebration of her astrological sign, as the singer was born on February 20, 1988, making her a Pisces. According to Greek mythology, the universal symbol of the Pisces sun sign is two fish, which are commonly represented in a yin-yang style. The Chinese symbol of yin and yang is highly recognizable and represents the duality of all things. RiRi’s Pisces tat tells us a lot about the singer; Pisceans are known for their gentle, friendly and generous nature, and are also popular with all kinds of people. Well, there’s definitely no mistaking Rihanna’s enormous popularity! On the darker side, Pisceans are also said to be secretive in nature and easily led astray.

Why Rihanna’s Tattoos are Special

Rihanna’s tattoo pictures show the sultry singer proud of who she is and not afraid to show the world a little bit about herself through her unique body art. All Rihanna’s tattoos have been either designed or hand-picked by Rihanna herself, and the Pisces sign tattoo is no exception. The Bajan singer’s neck tattoo behind her ear is a beautiful and feminine example of RiRi’s personality and style. All of the singer’s many body tattoos represent an important aspect of her life and also reinforce how much Rihanna loves tattoos! 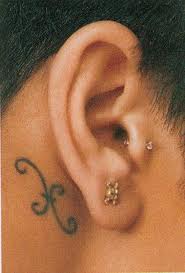 She even likes hanging around tattoo shops and has said that when she is in New York, after all the photo shoots and performances, she sometimes gets dressed and goes to the tattoo parlors in SoHo to hang out, when she should be relaxing.

Although some of Rihanna’s recent tattoos seem to be more direct reminders of who she is and where she is going in life, the Pisces sign inked behind her ear is simply an expression of her creative and intuitive personality. It may also speak to the pop star’s rebellion and inner tensions, as the Pisces Zodiac sign is traditionally represented as two fish swimming in opposite directions. We do seem to learn more and more about Rihanna with each new tat she gets, so fans of the singer may want to check out pictures of Rihanna’s tattoos to see what other ink 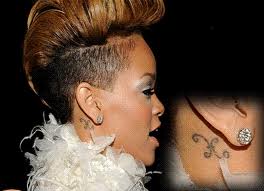 she has gotten in the past few years!