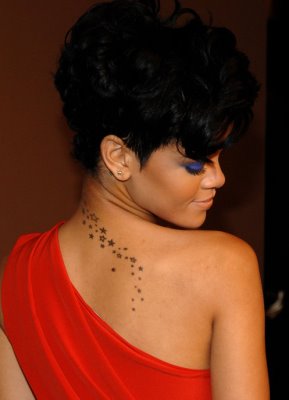 One of Rihanna’s most visible tattoos is a trail of stars extending from her neck down her back. The tattoo began as just a few stars on the singer’s neck, started by a tattoo artist in L.A., and was finished by Keith “Bang Bang” McCurdy, who added several more stars trailing down Rihanna’s back later on in New York City. Rihanna’s stars tattoo was inked in 2008 and seems to match on-again, off-again boyfriend Chris Brown’s neck tattoo, which features a trio of simple stars. Some people think the matching Breezy and RiRi neck tattoos are meant to represent shooting stars or wishes coming true, which is unfortunate given the circumstances that led to the couple’s break-up in 2009.

Rihanna’s star tattoo began as a very simple and tasteful design, consisting of a few tiny stars on her neck, some of which were outlined and some of which were filled in with black ink. When Bang Bang added to the ink though, the simple stars tat became a long trail of different sized stars, both outlined and filled in, cascading down Rihanna’s neck and back and brushing past her right shoulder blade. After getting the star tattoo Rihanna proceeded to get many more tats, and she’s not done yet! 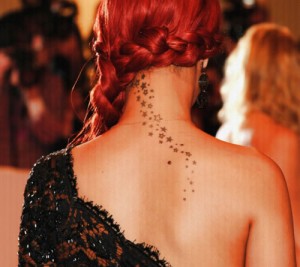 Rihanna’s tattoo on her neck isn’t the only star-inspired tat on the singer’s body. The star theme is actually repeated in Rihanna’s ear tattoo, which is a single outlined star located in the upper part of her left ear. Perhaps we can learn a little bit more about Rihanna by studying her new tattoos, like the trail of stars. Early pics of Rihanna’s neck tattoo show a tat matching the one that Chris Brown got around the same time. However, Rihanna later added to the original tattoo, extending the cluster of stars quite a distance down her back, thereby altering the “matchy” couples tat. Perhaps RiRi’s tattoo meaning is that she is now moving on from Chris Brown and finding her own direction in life. Or not.

More Tattoos in Store for Rihanna? 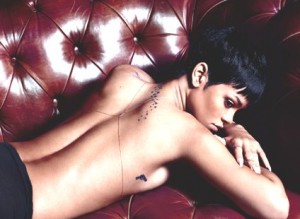 Rihanna’s body tattoos seem to be a celebration of her classy-meets-punk-rock style, a persona for which she is universally unapologetic. Rihanna loves tattoos and this cluster of tiny stars clearly represents something special and important to her. It does seem that the singer has given in to her self-professed tattoo addiction, though. When asked if she plans on adding more tattoos to her already inked-up body, she has reportedly said, “Who knows?” That means yes. We can only hope that RiRi’s future tattoos are as sexy and empowering as the ones she has now. All the pop star’s tattoos are unique and tasteful, which you can see for yourself by checking out some pics of Rihanna’s tattoos.