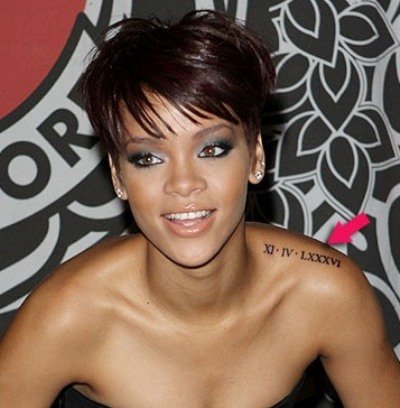 In June 2008, Rihanna got XI•IV•LXXXVI inked on the top of her left shoulder, which led to serious speculation when the tat was deciphered as 4.11.1986. What does Rihanna’s shoulder tattoo mean? It’s not her birthday, but is it Chris Brown’s? Nope. It’s the birthday of her best friend and manager, Melissa Forde, and it is written in Roman numerals with the date first, followed by the month. Talk about a great friendship…Melissa got the same tattoo of Rihanna’s birthday inked on her body too! I’m just going to ignore all the people who claim that RiRi’s shoulder tattoo is some kind of secret lesbian confession, because that’s just plain ridiculous.

Why Rihanna’s Shoulder Tattoo is so Special

Rihanna’s Roman numeral tattoo is very tastefully placed on her left shoulder and is one of her many body tattoos that is very visible to the public. Melissa is seriously fortunate to have a best friend like RiRi, because I don’t know how many people would be willing to tattoo a friend’s birthday on their body. Lucky for Melissa though, Rihanna loves tattoos!

Rihanna’s shoulder tattoo is classy and sexy and really makes us respect the superstar, since she clearly hasn’t forgotten who her friends are. Although almost all the singer’s tattoos are original and personal, RiRi’s tattoo meaning is obviously indicative of a very deep friendship between the two women. Rihanna has even referred to Melissa as her “blood sister,” and said that she loves Melissa even more than some of her family.

I’m sure Rihanna fans are happy to learn a little more about the singer, who isn’t afraid to show the world who means the most to her. Check out pics of Rihanna’s tattoos to see all of the pop star’s new tattoos; there’s no telling what body tattoos RiRi will come up with next!

3 Responses to: Rihanna’s Roman Numeral Tattoo on Her Shoulder