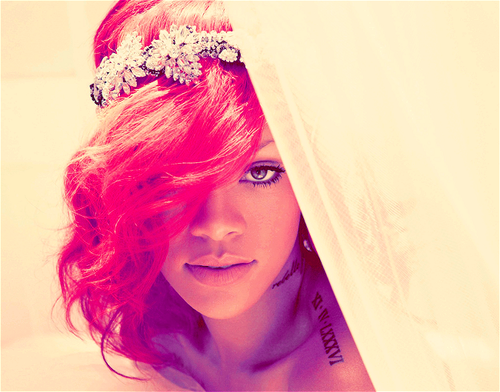 So there IS a softer side to Rihanna! Quick, save this pic to your computer, because you don’t get to see this Rihanna too often. It seems like Rihanna is usually either flipping someone off, stripping down to the bare minimum, or claiming that no one else is really in her league. The cool and edgy superstar from Barbados pretty much thrives on a bad-ass attitude (and has the bones to back it up) but this pic tells a different story. And check it out, from this angle you can see Rihanna’s killer shoulder and neck tattoos perfectly!

Rihanna’s Tattoos in This Pic

We all know that Rihanna loves tattoos. And the sweet thing is, you can usually see at least one of Rihanna’s tattoos in pretty much every photo snapped of the pop star. And there is definitely no shortage of pictures capturing RiRi’s tattoos out there. In this unique and pretty Rihanna pic, you can see the shoulder tattoo Rihanna got in 2008 and the neck tat she added to her tattoo collection in 2010.

The other tattoo Rihanna rocks in this photo – the Roman numerals on her shoulder – drummed up some serious media attention when she first got it. Some crazies out there actually believed that Rihanna’s shoulder tattoo was some kind of coded lesbian confession involving her best friend Melissa Forde. And in true Rihanna style, she just let the rumors fly. Like she cares whether people think she is in love with Melissa?! That’s whose birthday the Roman numeral tat depicts anyway, and Melissa has Rihanna’s birthday inked in a similar tat on her shoulder too. Now that’s what we call friendship!

In this pic of two of the singer’s tattoos, you can catch a glimpse of part of Rihanna’s neck tattoo, which says “rebelle fleur.” In case you were wondering, this is French for “rebel flower,” which Rihanna seems to think describes her just right. Why French? Because she said so, and that’s really all you need to know. This is one of Rihanna’s most unique tattoos and seems to be super personal, which only makes her fans beg for more.