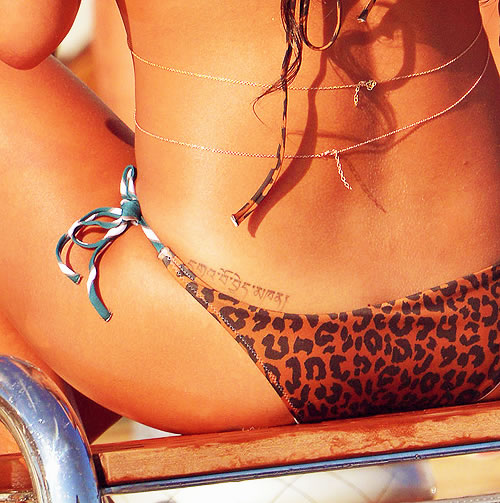 Rihanna has had love on the brain for the better part of this year – what with her numerous rendezvous with on-again, off-again boyfriend Chris Brown and the passing of her beloved grandmother, Ciara “Dolly” Brathwaite – and now she has a “lover” tattoo on her hip. Despite the shameless publicity surrounding her previous ink though (think racy Twitter and Instagram pics), there has been surprisingly little said about Rihanna’s hip tattoo since it was inked in January or March 2012. We spotted RiRi’s mysterious butt tattoo in pictures when it was still brand-spanking new, but we didn’t know exactly what it meant…until now. Rihanna hasn’t said anything about her hip tattoo in public, but lucky for you we’ve got the inside scoop. Read on to learn more about one of Rihanna’s most recent tats and why we think she prefers to get tattoos in foreign languages.

Rihanna’s Tattoos Are For Her Eyes Only

Rihanna is a lover, not a fighter, and now she has a hip tattoo to prove it! One of RiRi’s most discreet tattoos is the word “lover” inked on her lower back/hip/upper butt area, and it’s also the one tat the pop star has remained curiously silent about. Rihanna’s “lover” tattoo is inked in a foreign language, and although we don’t know yet exactly what language that is yet, we do know that RiRi loves cryptic tats that aren’t immediately understood by the general public. In addition to Rihanna’s “lover” hip tattoo, the pop star also sports a Sanskrit prayer on her hip, a French “rebelle fleur” tattoo on her neck, and an Arabic tattoo on her ribcage. Take a look at the rest of Rihanna’s tattoos, and you’ll notice that very few of them feature text written in normal, everyday English. Besides her discreet finger tats, the closest one is her “Never a failure, always a lesson” tat on her shoulder, but even that tattoo is inked backwards so she can read it in the mirror. RiRi’s tats are clearly meant for her and no one else.

Rihanna has no shortage of love in her life, judging by her close relationship with her late grandmother and the fact that men occasionally get into fist-fights over her (ahem…Chris Brown and Drake), but she apparently wants a few permanent reminders that love actually does exist inked on her body. In pursuit of this goal, RiRi has a tribal claw tattoo on her hand that stands for love and strength, the word “Love” inked on the middle finger of her left hand, and now her “lover” butt tattoo. Earlier in the year, RiRi was dragged into some serious drama involving Chris Brown, who was convicted of abusing Rihanna back in 2009, and the pop star has been at the center of some aggressive criticism regarding the recent reunion with her former abuser. RiRi however, has remained surprisingly civil throughout the entire ordeal…if you don’t count occasional tweets like “phuckyoapologies,” that is. We told you, she’s a lover!