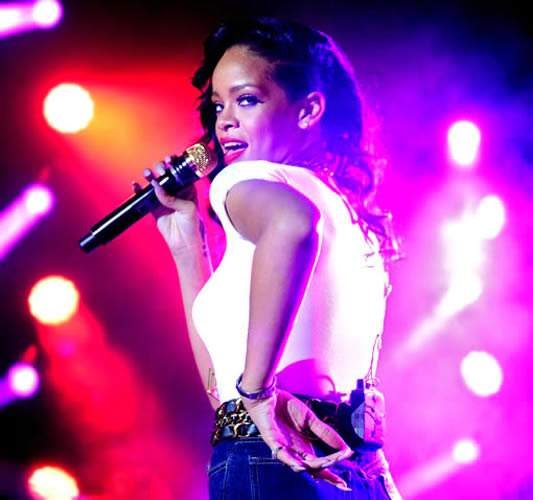 Tattoo artist to the stars, Kevin Paul, may soon add pop star Rihanna to his impressive list of celebrity clientele, as the British tattooist recently revealed that the songstress may be in the market for a new tattoo. Just last week, Kevin Paul was meeting with government health officials in London when he got a call requesting that he head to Manchester ASAP to tattoo some of Rihanna’s backing band members and background singers. Although Rihanna herself (surprisingly) chose to forgo getting inked that particular day, the Derby tattoo artist hinted that he may be called upon again in the near future – this time to tattoo the already inked-up Barbadian beauty.

Rihanna Sits This Tattoo Session Out

When all this went down, Kevin Paul was in the middle of meeting with government health ministers, trying to convince them that there should be more strict regulations surrounding tattooing, so just anyone can’t set up shop and start inking people. According to Paul, when the call came through from the Rihanna camp, “I dashed back to Derby, grabbed some sleep and headed north. I inked most of the band, mainly with music-related themes, and hung out with Rihanna.” Kevin Paul, who has inked quite a few of One Direction band member Harry Styles’ tattoos, seems pretty insistent that there may be a new Rihanna tattoo in the near future. “She told me she wants to get another tattoo – she already has several consisting of Egyptian symbols and stars – but the timing needed to be right.” More like RiRi wanted to see Paul’s work first-hand before allowing him to ink her body!

RiRi is currently in the middle of her Diamonds World Tour, and she is apparently itching to get some new ink…possibly as a tribute to the success of her latest album and tour? It has been five months since Rihanna debuted her latest tat – Queen Nefertiti on her side – after all. “I’ve been invited to go back to meet with everyone again and I’m hoping that Rihanna will want to have the tattoo done,” said Kevin Paul last week. It’s no wonder Paul is so eager to ink the likes of RiRi, considering the fact that the simple act of adding to Rihanna’s artwork is what led to Keith “Bang Bang” McCurdy’s sudden rise to fame recently. It would be interesting to see Rihanna step away from her favorite tattoo artist for her next tat though, just for a fresh perspective. Stay tuned and we will keep you updated on any new Rihanna tattoos!