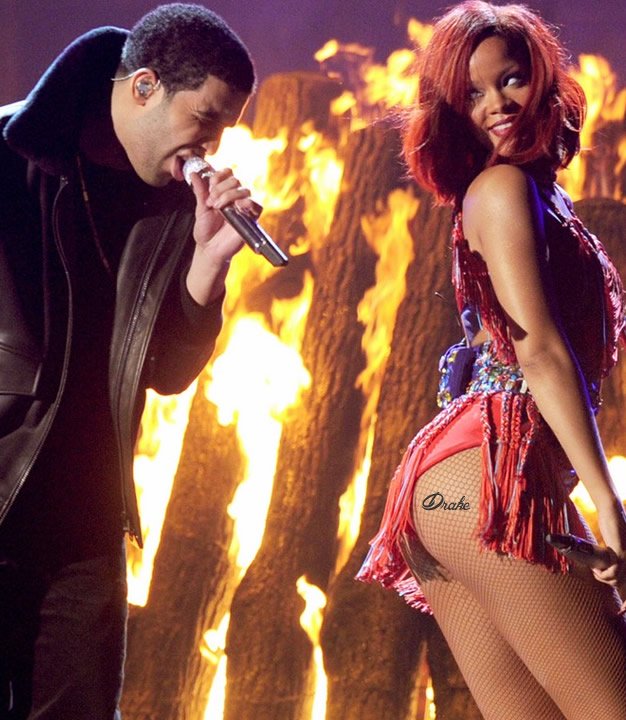 Now that Rihanna and Drake are officially dating (again), we’ve spotted the two cozying up to one another quite a bit recently, and word on the street is Rihanna may be planning to take the relationship one step further by getting a new tattoo inspired by Drake. It’s no surprise that RiRi may be planning tattoo number 24, since she’s admitted to being obsessed with ink in the past, but for the singer to put herself out there with a permanent tattoo tribute to Drake would definitely be a big deal for Rihanna, especially following her tumultuous history with ex-boyfriend Chris Brown. The only question is, what is the one thing that would convince RiRi to take the plunge and get a Drake tattoo?

According to a report by Hollywood Life, an unnamed source has hinted that Rihanna may be thinking about getting Drake’s name tattooed on her body…but only on one condition. “He would have to be her man, like her guy, and it would take time for her to feel like she’s the only one he loves, the only one he thinks and dreams about,” the source reported. This all seems pretty obvious, since tattoos are a very permanent accessory, and Rihanna doesn’t seem like the type to go under the needle for just any guy. That being said, Drake and RiRi have been inseparable the past few weeks and the Barbadian beauty even took time out of her own busy schedule to support her new beau during the European leg of his tour, attending several of his recent shows.

On Drake’s part, it would be quite an honor for Rihanna to get a tattoo of his name. After all, the only loved ones RiRi has gotten inked for in the past are her ex-boyfriend Chris Brown, her best friend Melissa Forde, and her grandmother Ciara “Dolly” Braithwaite, whose memory RiRi celebrated with a huge Goddess Isis chest tattoo when she passed away from cancer in 2012. “[Rihanna’s] grandmother was her world and she got tatted under her chest symbolizing her idol,” the source reportedly told Hollywood Life. “If she ever put [Drake’s] name on her body, that would mean that he had her heart – and that doesn’t come easy, but Drake’s well on his way!”

Rihanna has made some questionable tattoo decisions in the past – remember the traditional Maori hand tattoo she got using a hammer and chisel?? – but all of Rihanna’s tattoos hold a symbolic meaning for her, whether they have to do with music, her morals or her loved ones. It’s been years since Rihanna and Chris Brown got their matching star neck tattoos and tribal hand tats, and RiRi has stayed away from relationship tattoos ever since – and for good reason. So do you think Rihanna is finally ready to go all in and get another love-inspired tattoo, this time dedicated to Drake? Let us know what you think in the comments section below!

2 Responses to: Find Out What Might Convince Rihanna to Get a Drake Tattoo…