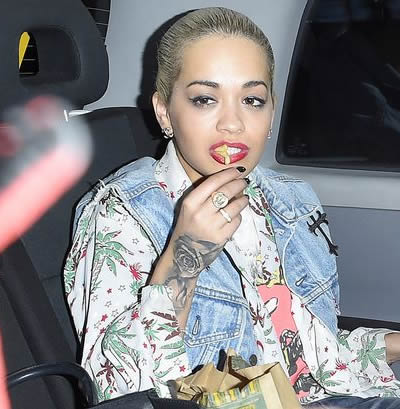 We would never have imagined that Rita Ora would cover up a tattoo done by the infamous Keith “Bang Bang” McCurdy, who is responsible for quite a few of her more impressive tattoos, but based on recent photos of the inked-up pop star, she has covered up the delicate feather ink on her right hand with a new ornate rose tattoo! Rita Ora showed off her new rose tattoo at the 2015 Billboard Music Awards in Las Vegas on May 17, and her new ink was photographed again while leaving a house party at friend Daisy Lowe’s house with pal Nick Grimshaw over this past weekend.

Rita Ora’s new tattoo is located on the outside of her right hand, and features a very detailed rose tattoo inked in black and gray, with one opened bloom and another closed bloom next to it. If we didn’t know any better, we’d say that Rita’s rose tattoo was inked by Bang Bang himself, because of how detailed and realistic it is, although we can’t imagine the celebrity tattoo artist would have enjoyed covering up one of his own pieces. Then again, Rita Ora’s tattoo looks an awful lot like the rose tat Demi Lovato got just two months ago to cover up her weird lip print tattoo, and that piece was inked by Gee’s Spot Tattoo Shop in North Hollywood, California.

Bang Bang, who has inked the likes of Justin Bieber, Rihanna and Cara Delevingne, among other tattoo-loving celebrities and pop stars, gave Rita Ora her feather hand tattoo almost exactly one year ago, while the pop star was staying at The Mercer Hotel in New York City – home base for Bang Bang’s tattoo shop. The feather tattoo was inked on the outside of Rita’s right hand, close by her tiny anchor wrist tat, and was done during the same tattoo session as the graceful ballerina tattoo located on the back of Rita’s right arm. Surprisingly, when she got her new rose ink, Rita chose not to cover up the anchor tattoo, which she did herself three or more years ago. 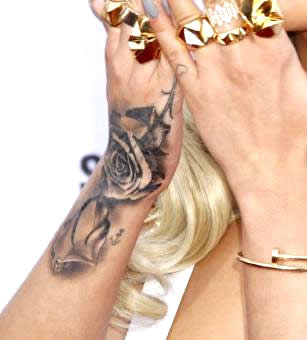 So the sad truth is that Rita Ora’s feather tattoo, which Bang Bang himself called “somewhat common but super super unique,” is no more, but we’re definitely digging the detailed rose tattoo prominently displayed on the 24-year-old’s right hand. Rita hasn’t said anything in public yet about the meaning behind her new rose ink, but the popular flower typically stands for beauty, love, femininity, peace, and is often associated with the Greek goddess of love Aphrodite, who Rita just happens to have depicted in a large tattoo on her upper left arm. What do you all think of Rita Ora’s new rose tattoo on her hand?? Let us know in the comments section below.