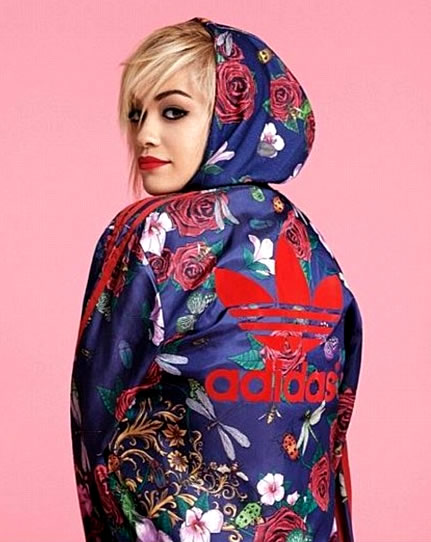 Rita Ora appears to be following in the footsteps of fellow fashion icon Cara Delevingne, and much like Cara collaborated with Mulberry for a new tattoo-inspired bag line this year, Rita has paired up with Adidas to create a clothing line inspired by her own personal style…and tattoos too! The wildly popular British singer announced her partnership with the athleticwear brand on May 20, and is more than excited about her new line of clothing, which she says will combine comfort and sexiness for an oh-so-Rita look.

When Rita was approached by Adidas at New York Fashion Week last September, she jumped at the chance to work with Adidas designers to create a new look all her own. This certainly isn’t Rita Ora’s first foray into the fashion world though – she currently has a line with Rimmel, she landed a campaign with Roberto Cavalli, and she is also the face of DKNY – but this gig with Adidas marks a milestone for Rita anyway, especially since she is the first female musical artist ever to collaborate with the athletic brand.

Each of the five capsule collections developed by Rita and Adidas – which are titled Black, Pastel, Colorblock Packs, Spray and Roses – is inspired by certain aspects of the pop star’s personality, music and visual preferences, and one of the collections was developed based on one of Rita Ora’s tattoos. “It’s the softer, more feminine side of me with its soft colors and cut-outs on the sleeves with suede,” Rita said about the collection, which was inspired by Rita’s dove tattoo, “you know, things that are nice to touch and feel.”

The dove tattoo of Rita’s that is getting so much attention these days was inked on the back of her neck and shoulder by tattoo artist Keith “Bang Bang” McCurdy exactly one year ago, and features a large black and gray dove in flight with its wings spread wide. Rita hasn’t said much about her dove tattoo in public, but the ink obviously holds an important meaning for her, especially if she’s using it as inspiration for an entire line of clothing.

It’s obvious that Rita is extremely excited about the fashion aspect of working with Adidas designers to create a new clothing line, but the collaboration also has a sentimental meaning for the 23-year-old, who was born in Kosovo but grew up in West London. “I’m a massive fan of the brand,” Rita said about her three-year partnership with Adidas. “I grew up working at a sneaker store when I was 16 and am a huge sneakerhead. It’s so cool that I’m able to do this with a brand that I sold when I was younger.”

Rita’s Black line of clothing, which the singer has sampled in photos on her Instagram account, is based on the styles that she prefers to wear at home in London and is due out in August, while the other four collections will follow in September and November. So, if you’re a fan of Rita Ora, now’s your chance to follow in her ever-evolving fashion footsteps and score some sexy Adidas clothing based on Rita Ora’s tattoos and unique street style!