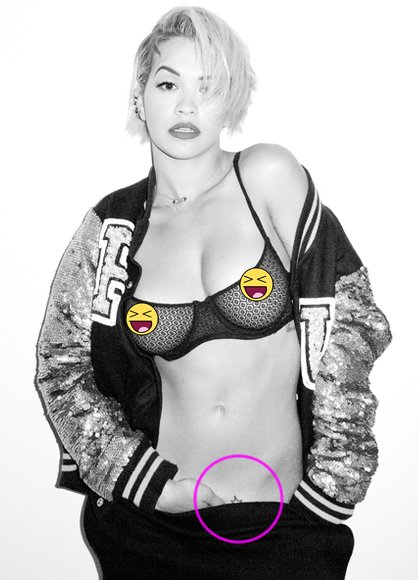 Rita Ora bared it all during a sexy photo shoot with famed photographer Terry Richardson this week, revealing a small star tattoo inked just below her waistline in the process. Judging by its discreet location and small size, this may be the first time Rita has ever showed off to the public her tiny waist tattoo, which features a black outline of a five-point star. We know that Rita Ora got her star tattoo inked sometime before April 2012, but we’ve never caught a glimpse of the mysterious tat…until now. Check it out!

During an interview with Complex back in April 2012, Rita briefly touched on the meaning behind her star waist tattoo, saying, “I have a star that I got with my best friend and we haven’t removed it because it’s a memory.” This means that her star tat was one of the singer’s very first tats, inked even before Rita Ora’s tattoos of her brother and sister’s names. We’re guessing the best friend that accompanied Rita to the tattoo parlor for her star tat is the same friend that inspired the pop star’s white ink tattoo of her BFF’s birthday on the inside of her bicep.

Stars are pretty popular tattoo designs for women, largely because they can stand for so many different things depending on the person. The star has long been considered a symbol of hope, spirit and truth, and the five-point star in particular is traditionally favored by people who are adventurous, multi-talented and versatile. In some cases, star tattoos can also represent home or guidance, as the tattoo design was first made popular by sailors who used the stars and constellations in the night sky to navigate while out at sea.

Since she got the star tattoo on her waist with her best friend, we’re guessing that Rita Ora’s tattoo represents something similar to friendship, hope, guidance or home. Rita’s BFF these days is British model Cara Delevingne, but since the two girls didn’t know each other back when Rita got her star tattoo, there must be another gal pal out there who means a lot to Rita. And because she got it inked in such a private location and rarely shows it off in public, Rita’s star tat must hold a pretty personal meaning for the pop star.