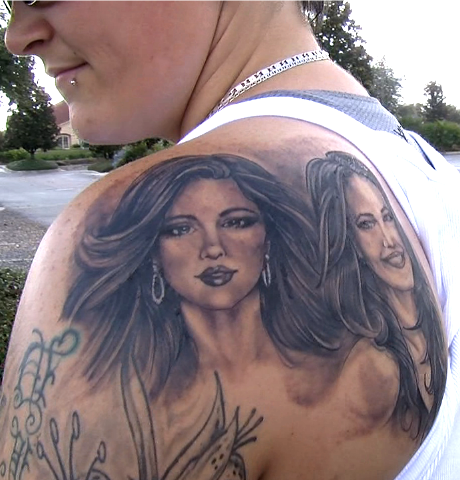 When Tampa HOT 101.5 radio DJ Jayde Donovan thought “there was no way” someone would get a tattoo of both Selena Gomez and herself for a chance to win backstage tickets to a Selena concert, she was wrong…very wrong. Meet Tampa resident Leah Presley, who rose to the HOT 101.5 challenge and spent four hours at a Tampa tattoo shop getting a gigantic tattoo of the singer and radio DJ side by side on her back. Leah’s tattoo is inked across her upper back and right shoulder, and features two large black and white portraits of Selena Gomez and Jayde Donovan. You may think that’s crazy, but get this: Leah Presley isn’t even a fan of Selena Gomez; she did it for her sister.

Jayde Donovan issued a challenge to HOT 101.5 listeners this week, daring them to get inked in exchange for Selena Gomez concert tickets and backstage passes, and she didn’t expect any takers. “There were so many people that were disgusted,” Jayde said about the contest. “And I thought, ‘there is no mother in their right mind that is gonna get a tattoo so that their child can meet Selena Gomez.’” Jayde was only half right though, because Leah Presley isn’t a mother. But she is a VERY loving sister. “I actually did this for my little sister,” she said about the Selena Gomez tattoo. “She’s obsessed with Selena Gomez, and I love her more than anything in the world. So I figured let her meet her idol.”

As you would expect, the backlash over Leah’s huge back tattoo was harsh and immediate. Hundreds of people posted Facebook comments slamming HOT 101.5 for issuing the “extreme” challenge, and Leah Presley’s decision to follow through. Leah is choosing to ignore the naysayers though, explaining: “It’s a work of art. My body is a canvas. Just let them keep hating. I’m going to keep doing what I’m doing.” Wondering if she regrets the decision to get the gigantic back tattoo? Not at all. “My sister’s reaction was priceless, and I’ll remember that for the rest of my life,” she said. As far as she goes, Leah says that she has a lot of tattoos, but the new ink is her favorite. “Best experience I’ve had in a long time,” she said. “No regrets, never!”