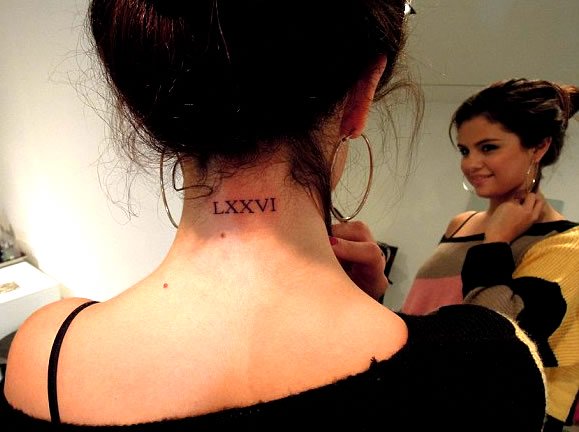 Selena Gomez was just testing the waters with her first tattoo, because she debuted a new Roman numeral neck tat in September ’12, and this one is slightly larger and not quite as subtle as her first. Selena’s second tattoo is inked on the back of her neck, and features black Roman numerals that read “LXXVI,” or “76.” Because Selena hasn’t spoken publicly about her neck tattoo, there is a little bit of mystery surrounding the new ink and what the “76” in Roman numerals actually means. Good thing we have celebrity tattoo artist Keith “Bang Bang” McCurdy to clear that up for us. According to Bang Bang, Selena Gomez’s neck tattoo was inked in honor of a family member that she holds close to her heart.

Despite the fact that Selena assured fans that she was done with tattoos in February – after getting the music note inked on her wrist – the pop star is at it again. This time though, Selena commissioned the ever-popular Bang Bang McCurdy to ink her tattoo, joining the ranks of über-popular celebrities like Rihanna, Chris Brown and Vanessa Hudgens, all of whom sport tattoos àla Bang Bang. According to Mr. Bang Bang, “Selena was nervous [the neck tattoo] might have been painful, so she held her best friend’s hand the whole time. But she did a great job.” Could this mean that there are more tattoos in Selena Gomez’s future? We sure hope so!

Mysterious Neck Tattoo a Tribute to Her Mom?

The big question of the day is, what family member is important enough to Selena Gomez that she got another tattoo permanently inked on her body in their honor. According to some, Selena’s neck tattoo is a tribute to her mother, Amanda “Mandy” Teefey, who was born in 1976 – hence the number “76.” Selena obviously has a close relationship with her mother, who raised the pop star on her own as a single working mom, after divorcing Selena’s father a few years after she was born. In fact, Mandy Teefey, a former stage actress, may have played an important role in Selena’s decision to put her music career to the side and concentrate on acting in 2012. According to Selena herself, she developed an early interest in acting while watching her mother prepare for and perform in theater productions.

Selena is a Family Gal

Selena Gomez surprised many of her fans when she got her first tattoo in February 2012, and raised eyebrows yet again when she debuted her Rihanna-esque Roman numeral tattoo on September 29, 2012. But in spite of recent efforts to shed her good-girl image that has remained firmly in place since her Disney days, Selena Gomez remains a super sweet girl, and we think it’s pretty awesome that both of her tattoos so far are connected to her strong bond with her mother. As she said about her music note tat, “I was named for a singer [Tejano singer Selena Quintanilla-Pérez] and music obviously is a big influence for me. And there’s music stuff with my mom that means a lot to me, too.” Shortly after getting her neck tattoo Selena Gomez tweeted the following message: “You will never know how much you all mean to me.” This chick is one family-oriented gal.