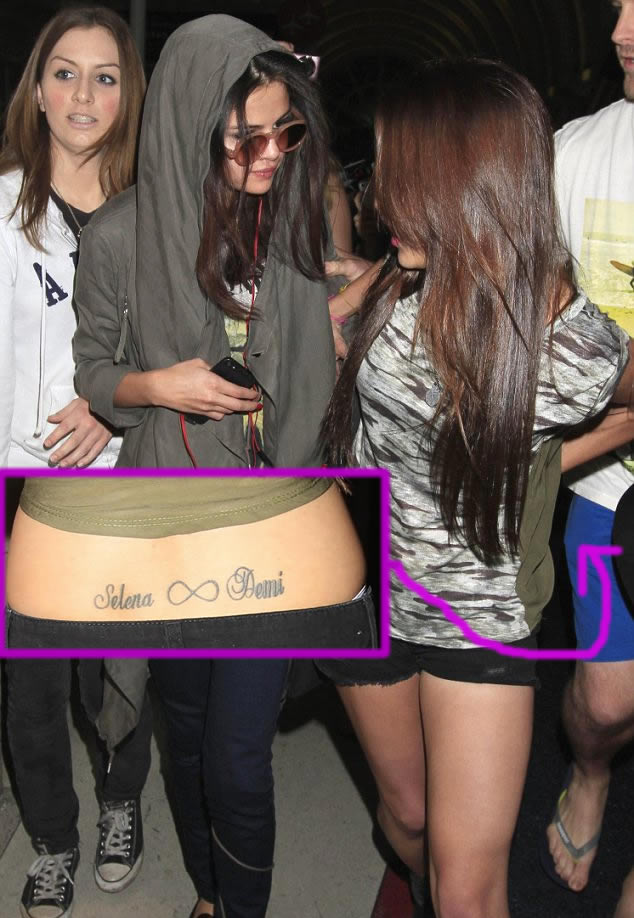 What happens when you can’t decide between a Selena Gomez tattoo and a Demi Lovato tattoo? You get them both, of course! A superfan showed her dedication to both of the beloved pop stars over the weekend when she approached Selena and Demi in Los Angeles and showed off a back tattoo she had inked in their honor. The fan tattoo is a bonafide tramp stamp featuring an infinity symbol inked at the base of her spine, with the name “Selena” inked on the left side of the symbol and “Demi” inked on the right. When Selena spotted the fan tattoo, she didn’t seem too freaked out by the tribute, although we’re wondering what her and Demi think about being linked together for life in a permanent infinity tattoo…

Selena Gomez and Demi Lovato certainly used to be besties, but the 20-year-old pop stars appear to have gone their separate ways in recent years. According to Selena, “when Demi finished up her tour and I finished shooting an episode of [Wizards of Waverly Place], we finally met back up in Los Angeles and we both just changed, faded apart. We’re not as close as we used to be, and of course we probably won’t be again.” *Collective sigh* More recently, during a radio interview, Demi Lovato dished on her hardcore fans and dissed former BFF Selena Gomez and Taylor Swift, saying that the two singers simply “flaunt around a boyfriend and sell a couple albums,” instead of opening up to their fans like Demi does. Ouch!

When the inked-up super fan approached Selena to reveal her tribute tattoo, the pop star had just returned from Miami, where she was catching some rays and apparently taking care of some business as well. The infinity ink probably came as a little bit of a shock to Selena, considering her and Demi aren’t on the best terms these days, but Selena kept her cool and simply admired the back tat. Some people say Demi and Selena have kissed and made up since drifting apart, but who can really keep up with these Hollywood breakups?? We’re sure that, at the very least, the Selena/Demi fan tattoo spurred some nostalgic feelings about former BFFs’ relationship. At least Selena Gomez and Demi Lovato fans are keeping the friendship alive!