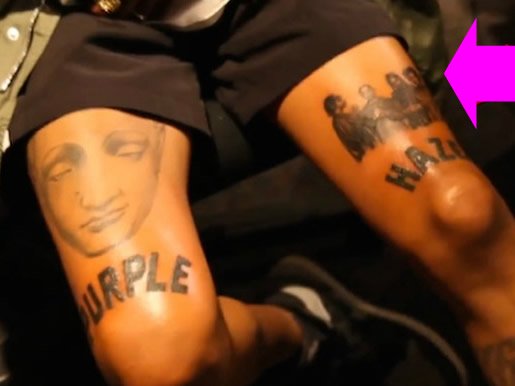 Wiz Khalifa has finally found the perfect complement to the gigantic Buddha tattoo he had inked on his thigh last year – a portrait tattoo of rap group Bone Thugs-n-Harmony! The ink-obsessed rapper revealed his brand new tattoo, which is inked on his upper left thigh, during an interview earlier this week, and the impressive tat features a black and white portrait of the entire five-man group. Some people may think Wiz’s Bone Thugs tattoo is weird (sorta like the grown ass man who has a portrait of Justin Bieber inked on his thigh), but the Bones themselves are honored to be immortalized on the body of a hip hop legend – even if the tattoo is in a pretty intimate location.

Truth be told, Wiz Khalifa is running out of places to get inked, so it wasn’t much of a surprise when he chose his upper thigh as the location for his huge Buddha portrait tattoo last October, especially since he has a song with the lyrics: “Ink my whole body, I don’t give a mother****.” Not long after that, Wiz added a pretty large “Purple Haze” textual tattoo to the spots just above his knees, and the lonely “Haze” above his left knee was just begging for another portrait tat to keep it company. Enter Bone Thugs-n-Harmony, and Wiz Khalifa’s tattoos on his upper thighs are pretty much complete. Now he just has to tattoo his knees and lower legs and Wiz will literally be covered in ink.

Bone Thugs-n-Harmony portrait tat, but for their part, Krayzie Bone, Layzie Bone, Bizzy Bone, Wish Bone and Flesh-N-Bone say the ink is proof that they are legends in the hip-hop game. And with Wiz Khalifa’s Buddha tattoo in the same spot on his other thigh, you have to admit, the Bone Thugs are in pretty good company!