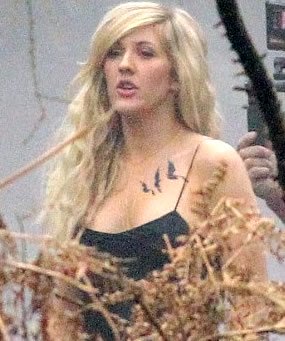 When we heard that Ellie Goulding got a new tattoo inspired by the movie Divergent, due out this month, we assumed she must just be a die-hard fan of the book-to-movie series. In truth, the singer contributed several songs to the movie soundtrack, and if you ask Divergent director Neil Burger, he’ll tell you that “In many ways Ellie has become the inner voice of our heroine Tris.” It’s not so surprising then, that Ellie Goulding would opt for a new tattoo tribute to the film, and more specifically, to heroine Beatrice “Tris” Prior, whom she obviously relates to. In fact, Ellie’s Divergent tattoo is the same design that Tris gets in the movie to honor the three members of her family, and features three swooping blackbirds inked just below her left collarbone. The pop star revealed her new collarbone tattoo in an Instagram photo on March 5, where you can just barely see the wings of the blackbirds peeking out from under her shirt.

In the Divergent movie, Tris gets her blackbirds tattoo when she leaves her family behind to join the Dauntless faction, which considers tattoos a symbol of bravery and fearlessness. This represents the turning point in Divergent, when Tris becomes the heroine, and it’s clear that Ellie Goulding relates to the protagonist in the film. Both woman are strong, athletic and spirited, and are definitely able to stand up for themselves. Not only is Ellie featured on the Divergent soundtrack, but her song “Beating Heart” was written especially for the film, and she apparently contributed in a more profound way as well. “We started working on the film with songs from Ellie Goulding’s album Halcyon, and soon found out that the texture of her music and the tone of her voice matched perfectly with our film,” Burger noted. “[Goulding’s] lyrics almost merge with Tris’ voice-over and her music lets the movie soar above the tragedy.”

Writing music for Divergent was a new experience for Ellie, and judging by her tattoo, it was a good one! “I basically got to go into the studio, and just be put in front of the microphone for a few hours and sing whatever I wanted to sing.” Some are speculating whether Ellie Goulding’s tattoo is real or temporary, but certainly not because she doesn’t seem like the tattoo type. Ellie already has four tattoos, most of them small, inked on different parts of her body, including a red triangle tat on her right wrist, the letter “J” inked on her left side and a Tibetan mantra inked in red on her left wrist. She even has a cool Katniss Everdeen-type small arrow tattoo that she had inked in white on her index finger in June 2013. There’s no official word from Ellie on whether her arrow tattoo is a tribute to Katniss’ bad-ass bow-and-arrow-wielding character in The Hunger Games, but the pop star obviously has a thing for movie-inspired tattoos and her song “Mirror” was featured on the movie soundtrack, so that’s our guess!