**Update: In a blog post published on her website in April 2016, Kendall Jenner explains that her matching broken heart tattoo with Hailey Baldwin was meant to represent her “devil side,” compared to Kendall’s full heart tattoo, which symbolizes an angel.

Despite her original intention to follow big sister Kim’s strict no-tattoo policy, Kendall Jenner went under the needle this week for a matching broken heart tattoo with model and bestie, Hailey Baldwin. Kendall Jenner’s tattoo features a small heart that is broken in half, inked in white on the inside of her left-hand middle finger, while Hailey’s broken heart tattoo is inked in the same spot in red. Kendall’s new tattoo comes just six months after the model swore she would never mark her body with a permanent tattoo.

Hailey Baldwin, who got a matching “baldwin” text tattoo on her other middle finger with cousin Ireland less than two weeks ago, uploaded the picture of the girls’ fresh ink to her Snapchat account on August 11, along with the caption: “Hails n Kenny.” The model quickly deleted the photo, but not before fans grabbed a screen shot of Hailey and Kendall’s matching tattoos as proof that the 19-year-old sister of Kim Kardashian has actually opted for her second tattoo.

While some of the Kardashian crew, like Khloe, Rob and even Kris, have one or more tattoos to their name, younger siblings Kendall and Kylie Jenner had remained completely un-inked…up until recently. In fact, this is actually the second matching tattoo Kendall Jenner has gotten with Hailey Baldwin, following a late-night tattoo session back in June, which resulted in Kendall getting her first-ever tattoo: a tiny white dot on the inside of her right-hand middle finger. 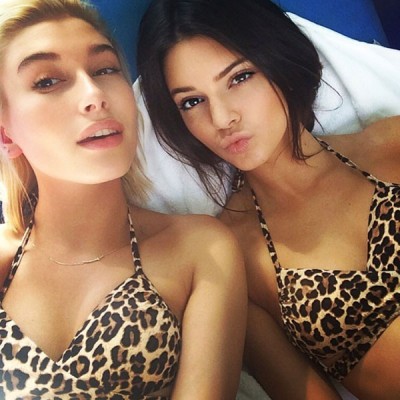 Kendall Jenner hasn’t said anything about the meaning behind her broken heart tattoo in public, but the 19-year-old has been linked recently to Nick Jonas and Zayn Malik, so maybe one of those boys broke the poor girl’s heart. Whatever the significance of the heart ink, it’s obvious that Kendall Jenner has gotten over her fear of “forever,” which is why she always said she wouldn’t get a tattoo. Oh, and there’s always the fact that Kim believes you should never “put a bumper sticker on a Bentley.”