We knew that Harry Styles was rocking a new booze-related tattoo on his arm, and now the One Direction singer has finally given us a full glimpse of the ink he got on his arm around the same time as his racy mermaid tattoo. While performing live at the Universal Orlando Resort in Florida earlier this week, Harry Styles revealed a new tattoo on his left arm featuring an alcohol bottle and the words “you booze you lose” written in a handwriting-style font above and below the bottle. Harry’s “you booze you lose” tattoo was likely inked by Liam Sparkes of the Shangri La tattoo shop in the United Kingdom, the same artist who inked Harry Styles’ mermaid tattoo, which is also located on his left arm.

Harry Styles’ tattoo is especially interesting considering the fact that many speculated too much booze was the reason the singer threw up on the side of a Los Angeles freeway last month, the day after the pop star attended a shindig hosted by British singer Lily Allen. Harry cleared up that rumor shortly after, claiming that he had just finished up a hardcore hike in Hollywood when the barfing incident occurred, and that he definitely wasn’t suffering from a hangover.

Let’s be honest. Most of us have, at some point, had a hangover that was bad enough to swear off booze forever – or for the rest of that day at least – and Harry Styles’ new alcohol-related arm tattoo has us wondering if the baby-faced pop star has joined the not-so-illustrious club. However, according to his best pal and fellow singer Ed Sheeran, Harry doesn’t drink when he’s in the United States, since he is only 20 years old at the moment. 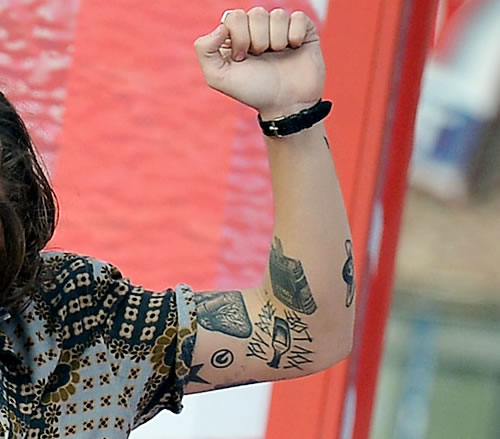 Just last year, when asked about Harry’s drinking habits outside of the UK, Ed Sheeran had this to say: “If I’m being totally honest I’ve never seen him drink in America and that’s not be being politically correct. He’s come round my flat and I’ve had a Corona and he’s had a diet coke.” When Harry’s back in the UK though, that’s a whole other story though, right? Our guess is, Harry must have had one hell of a hangover when he hit up Sparkes’ tattoo shop for his “you booze you lose” arm tattoo!