**Update: This half a heart tattoo on Harry Styles’ chest is a matching friendship tattoo with Kings of Leon drummer, Nathan Followill!!

While lounging shirtless by a pool in Chicago this past weekend, prior to performing a show at Soldier Field, One Direction singer Harry Styles inadvertently revealed a brand-new tattoo on his chest of half of a broken heart, which promptly sent the Interweb into a tizzy. Who is Harry Styles’ broken heart tattoo for?? Does someone else have the other half of the heart?? We can’t help it, these are the sort of questions we ask ourselves when a hunk like Harry Styles gets a fresh new tat! Read on to learn more about Harry Styles’ tattoo, which features the outline of half a broken heart inked on the left side of his chest, in almost the exact same place as his real heart.

Some speculate that Harry Styles’ new tattoo could be inspired by 1D’s “Half a Heart” song off their Midnight Memories album, but that album was released back in 2013, and we can’t imagine it taking Harry two years to come up with this broken heart tat idea. Others believe Harry’s broken heart tattoo could be a permanent reminder of the heartbreak his band members and die-hard fans experienced when Zayn Malik decided to quit the group back in May. Others still believe the broken heart ink is a sure sign that One Direction is breaking up for good, but Louis Tomlinson recently reassured fans that the group is only taking a temporary break. Phew!! 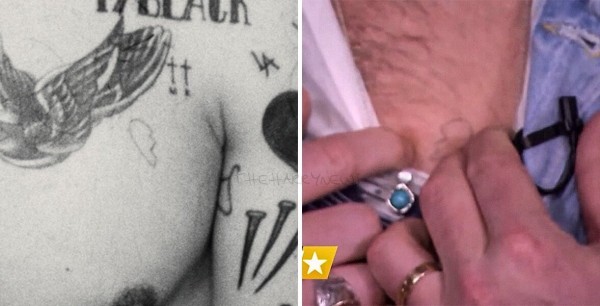 Harry Styles already has more than 50 tattoos scattered across his body, but it’s been a few months since the One Direction singer revealed a new tattoo, his most recent being the large monkey knot ink on his thigh. And it’s been even longer since Harry was involved in a serious relationship, so we can’t imagine his new broken heart tattoo was inspired by a woman. However, Harry was spotted hanging out and getting pretty cozy with a mystery woman during an August 23rd outing in Chicago, although it’s hard to believe this new chic could have already broken his heart.

To be honest, our interpretation of Harry Styles’ heart tattoo is the complete opposite of suffering from a broken heart. We have a feeling Harry’s ink may have been designed after one of those “best friend” necklaces we all had as kids, which split a heart into two – one half for one friend and one half for the other – as a reminder of their friendship. If that’s the case, is there someone out there who holds the other half of Harry Styles’ heart? If so, we are dying to know who!

One Response to: Harry Styles Reveals New Half a Heart Tattoo On His Chest