Ireland Baldwin has been on quite the tattoo trip lately, and the 19-year-old daughter of Alec Baldwin and Kim Basinger showed off yet another new inking on her shoulder at New York Fashion Week last week, which she attended with her stepmother, Hilaria, and baby step-sister, Carmen. Ireland Baldwin’s new tattoo features the iconic portrait of Ziggy Stardust, a persona that was adopted by David Bowie in the early 1970s, and that inspired the David Bowie song “Ziggy Stardust,” from the album The Rise and Fall of Ziggy Stardust and the Spiders from Mars.

Inked on the top of her left shoulder, Ireland Baldwin’s tattoo features a simple black and white outline of Ziggy Stardust’s portrait, complete with a red lightning bolt inked across his face and eye, which was depicted on the cover of David Bowie’s 1973 album, Aladdin Sane. Ireland Baldwin’s new inking is located just above the large floral mandala-like tattoo she has inked on her upper left arm, and on the same arm as the adorable Hello Kitty tat she had done at the Hello Kitty convention in November 2014. 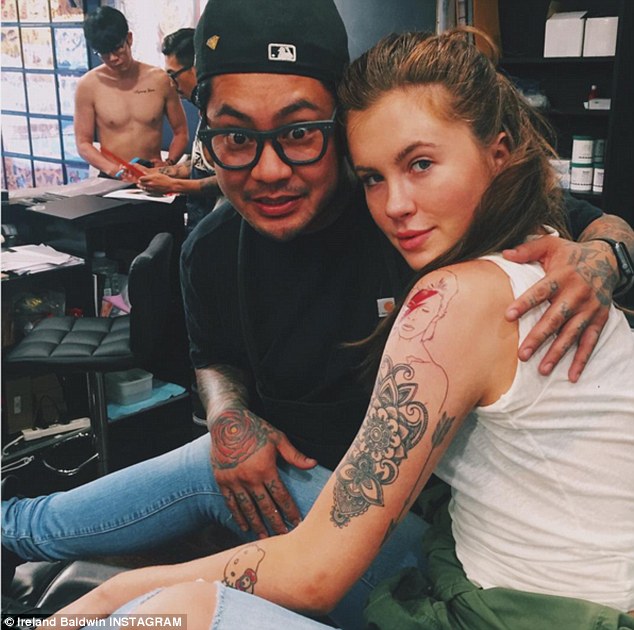 Ireland Baldwin apparently had her David Bowie shoulder tattoo inked on September 14, and shared a photo of the ink on Instagram last week, along with the caption “oooooouuuuuiiiiiii,” although the model seems to have since deleted the post. Ireland also uploaded a photo of celebrity tattoo artist Jon Boy, who is based in New York City, and, in addition to creating Ireland Baldwin’s tattoo of David Bowie’s alter ego, is also responsible for inking several of Hailey Baldwin’s tattoos and Kendall Jenner’s tattoos.