In the ultimate tribute to all of her fans, whom she lovingly calls her “little monsters,” Lady Gaga got a new tattoo with the words “Little Monsters” inked right next to her Rilke arm tattoo. The pop star’s arm tattoo was inked on February 1, 2010 at the Shamrock Social Club tattoo parlor in Hollywood, and is located just to the right of Gaga’s German tattoo, near her inner elbow. Lady Gaga’s arm tattoo is neatly inked in light black script on her left arm, which adheres to her dad’s wishes to keep the right side of her body “slightly normal.” But by tattooing only the left side of her body and keeping the right side clean, doesn’t that make her kind of less…normal? Oh well, normal or not, Lady Gaga’s little monsters have got to appreciate the pop queen immortalizing them on her body, even if it’s just the left side of her body.

Shortly after she got the Little Monsters tattoo, Gaga tweeted the following message to her adoring fans: “look what I did last night. little monsters forever, on the arm that holds my mic. xx,” accompanied by a picture of her inspired ink. Gaga has also expressed her love for her fans in tweets like “we won big tonight little monsters, I am so proud to make music 4 you. I hope I continue to inspire u the way u inspire me. You’re everything,” which was posted after Gaga won two Grammy awards in 2010: Best Dance Recording for “Poker Face” and Best Dance Album for The Fame. In fact, it was the very day after her huge Grammy success that Gaga’s Little Monsters tattoo became a permanent fixture on her left arm. 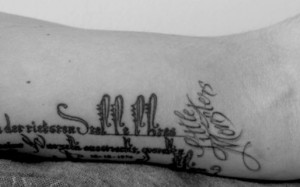 Not only has Lady Gaga inked a tribute to her little monsters on her arm, but she also named her 2009 200-date world tour The Monster Ball in their honor. And there is no shortage of fans who have returned the favor. As little monsters flock from all over the world to support their idol, it’s amazing to see all the different ways that Gaga fans have inked their bodies with tattoos of Mother Monster. However they choose to show their adoration of the queen of pop music, Gaga remains forever appreciative. As she says, “I have become a better artist because of my fans. They are a revolution. They are living proof that you don’t have to conform to anything to change the world.” 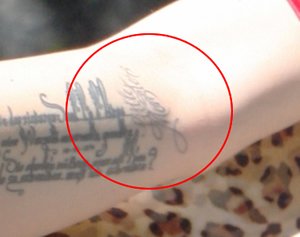 Even though Lady Gaga is an uber-famous diva, that doesn’t mean she doesn’t appreciate her fans. Seriously, how many stars do you know that would go so far as to give their fans a loving pet name, nevermind actually getting a permanent tattoo of that nickname on their body? Very few. It’s true though, that Gaga’s fans have had a lot to do with her success. Just three years ago, the flamboyant star was an unknown, and now she is one of the most famous celebrities in the world. With more than 35 million Facebook friends and twenty million plus Twitter followers, Lady Gaga has found her way into the hearts of little monsters the world over. And she takes this responsibility very seriously. In fact, her Twitter bio, which is supposed to include a description of herself, includes only two words: Mother Monster.